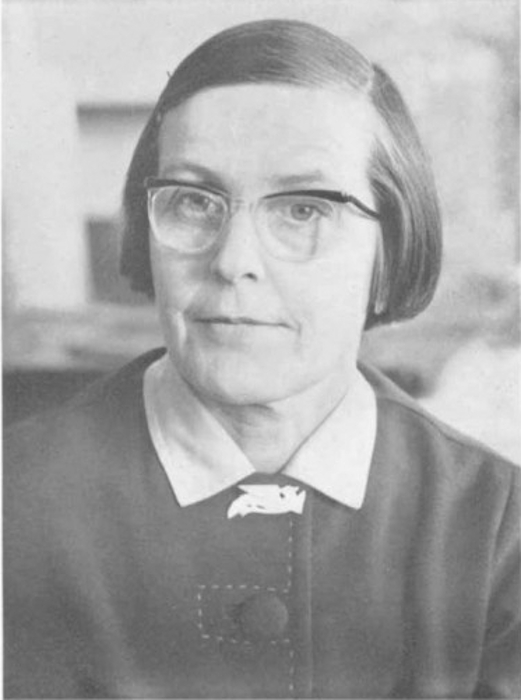 Figure 3.3.1: Mary Barber (1911-65). Photographer and date unknown. (Credit: Pollock). Born in Derby, Barber was the youngest of three girls. She followed in the footsteps of her physician father by deciding to go into medicine and was the fifth generation in her family to become a doctor. In 1928 she completed her medical training at the London School of Medicine for Women. Barber started her career in pathology at the Royal Free Hospital in 1936. Barber gained an international reputation for her use of epidemiological and in vitro methods to study the spread of staphylococcal infections in hospitals. Barber's work was cut short when she was tragically killed in a car crash at the age of 54.

In 1940 Mary Barber gained a position as a Hammersmith Hospital where she began studying the spread of staphylococcal infection in the hospital. This she did with the help of epidemiological methods and a new technique known as phage-typing which made it possible to detect different strains based on their fingerprint within the hospital. Worryingly she found that the infections appeared to have become resistant to penicillin soon after the drug had been introduced into the hospital. In 1947 she warned that the increasing incidence of Staphlococcal strains resistant to penicillin was 'so rapid as to be alarming'. What was particularly concerning was she had found that the rise seemed to be linked to the spread of a minority of resistant strains through the hospital rather than due to selective pressure from treating patients (Barber, 1947). A year later Barber took up an appointment at St Thomas' Hospital where she discovered that nursing staff were a major contributor to cross infections in hospitals and that they quickly became nasal carriers of penicillin-resistant bacteria after starting to work on hospital wards (Barber, 1948).

So struck was Barber by her findings that she soon became a significant leader in campaigns to curb the use of antibiotics. In 1948 Barber wrote, 'Penicillin has been discussed so much in both lay and medical circles that the subject seems hackneyed. Nevertheless, a precise understanding of just what it will and still more important what it will not do is often lacking. The drug received such acclaim in the early forties that it came to be regarded by many in the nature of a charm, the mere sight of which was sufficient to make all bacteria tremble. Nothing, of course, could be further from the truth and the present widespread and often indiscriminate use of penicillin, particularly as a preventive measure is seriously menacing its future reputation' (Barber, 1948).

By 1958 Barber had become a professor in clinical bacteriology at the British Postgraduate Medical School and Hammersmith Hospital. Once there, Barber began testing out the effectiveness of different strategies to curb the spread of antibiotic resistance. She tried this out in seven wards of Hammersmith Hospital: two female and two male general surgical wards, one female and one male ward primarily devoted to orthopaedic patients and one male urology ward. Altogether these wards admitted 5,239 patients. All of the staff were given strict instructions about when it was appropriate to use antibiotics. They were only to give such a drug when it was clear that the patient would benefit. Barber realised that it would be impossible to impose a total ban on antibiotics so restricted their use to two medical and two surgical wards, where staff were taught how to carefully inject the drug so that none of it sprayed into the atmosphere. Strict measures were put in place in all the wards to enforce high hygiene and sterilisation levels. All cases of infections were to be recorded and specimens taken in such cases and tested, usually on two or more antibiotic ditch plates. In addition, nasal swabs were taken from as many patients and staff as possible (Barber, Dutton, Beard, et al). 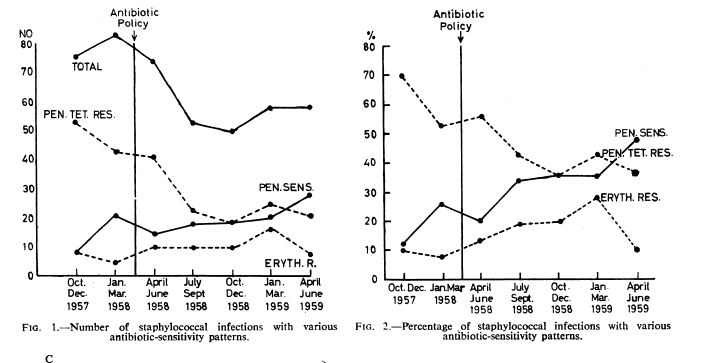 The two graphs highlight the decline in resistance to penicillin, tetracycline and erythromycin that was recorded in staphylococci bacteria tested in the laboratory following the implementation of Barber's strict controls around the use of antibiotics at Hammersmith Hospital between October 1957 and June 1959.

Barber lectured widely on the issue of antibiotic resistance and published many papers on the subject throughout the 1950s and 1960s. For her, the most troubling issue was the rise of resistant staphylococci bacteria, which she believed had become more virulent as a result of the widespread use of antibiotics and increasing complacency in hospitals about adherence to antiseptic measures. In 1959 she poignantly wrote, 'the control of antibiotic-resistant staphylococcal infection is an urgent problem and is not simple. It requires the active cooperation of doctors, nurses, physiotherapists, porters and domestics. Scrupulous asepsis and barrier-nursing mean extra work for all concerned. It is readily obtained in a ward where a severe outbreak of infection has recently occurred, but at other times, in the words of Sir Alexander Ogston, "human nature forgets unseen foes"' (Pennington).

Cartoons of Mary Barber by Lindsay McBirnie as published by the MRC.

<< The mounting evidence of resistance to drugs