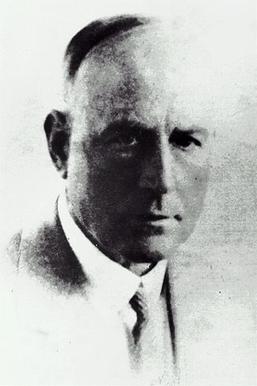 Figure 4.1.1: Frederick Griffith, n.d. (Credit: Maclyn McCarty, Steven Lehrer, Wikipedia). Griffith (1879-1941) was born in Hale, Lancashire county, England, and completed a medical degree at University College in Liverpool in 1901. After graduating Griffiths served as a house-physician and house surgeon at Liverpool Royal Infirmary alongside working as a pathologist at the Thompson Yates Laboratory. He also was involved in scientific investigations for the Royal Commission on tuberculosis. Griffith moved to London in 1910 to work as a medical officer for the Local Government Board and in 1911 joined the Pathology Laboratory run by the British Ministry of Health. His career was cut short in 1941 when he was killed in an air raid during the London blitz.

The first person to observe that bacteria might have the capacity to transfer genetic material was Frederick Griffith, who from 1918 became involved in efforts to help create a vaccine to stop the spread of bacterial pneumonia which had contributed to a disproportionately large number of deaths during the influenza pandemic of 1918-19. Before he could create a vaccine he needed to understand the epidemiological patterns of pneumonia and its pathology. In order to do this Griffith collected a large number of pneumococci samples isolated from patients around the country which he classified into different groups.

Overall Griffith found there to be two forms of pneumococci bacteria. Each of them differed in their appearance. One was smooth (S) and had an outer coat (capsule) of polysaccharides. By contrast the other (R) was rough and lacked a capsule. Out of the two strains the S one was discovered by Griffith to be more lethal when injected into mice. While mice who received the S strain died within a few days, those given the R strain survived. Griffith subsequently discovered that he could destroy the virulence of the S strain by heating the bacteria.

Soon after his initial observations, Griffith noticed another strange phenomenon - all the mice died when injected with a mixture of heat-killed S bacteria and live R bacteria. This was particularly striking because no mice had died previously when given the bacteria by themselves. Furthermore, when Griffith isolated the live bacteria from the hearts of the dead animals injected with the mixed strains they had smooth capsules characteristic of the S strain. Additional experiments indicated that this new characteristic was passed on to succeeding generations of bacteria. Puzzled by what he had found Griffith repeated the same experiments several times, each time getting the same result.

Publishing his findings in 1928, Griffith hypothesised that a chemical substance was somehow being transferred from the heat-killed S strain to transform the previously harmless R strain. What the chemical nature of the transforming factor was remained a mystery. All that was known was that it could survive heat (Griffith). 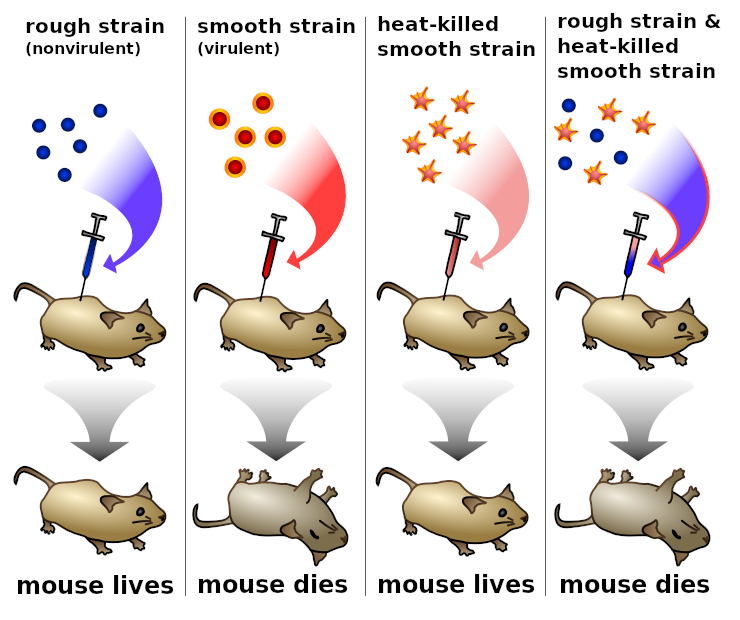 Griffith's discovery was largely ignored until 1934 when Oswald Avery launched a series of experiments (Figure 4.1.2) to identify the specific molecule that seemed to transform the R strain into the more virulent S strain. This he did with Maclyn McCarty and Colin MacLeod. They hypothesised that either a protein or a nucleic acid was responsible for the genetic change in the bacteria. Taking careful measures to purify the pneumococcal extracts, the three scientists established that DNA was the key chemical substance that lay behind the change. It was the first time DNA was directly observed to transform an organism. Despite the results produced by the Avery group, not everyone was willing to accept that DNA, rather than proteins, stored and transmitted genetic information. 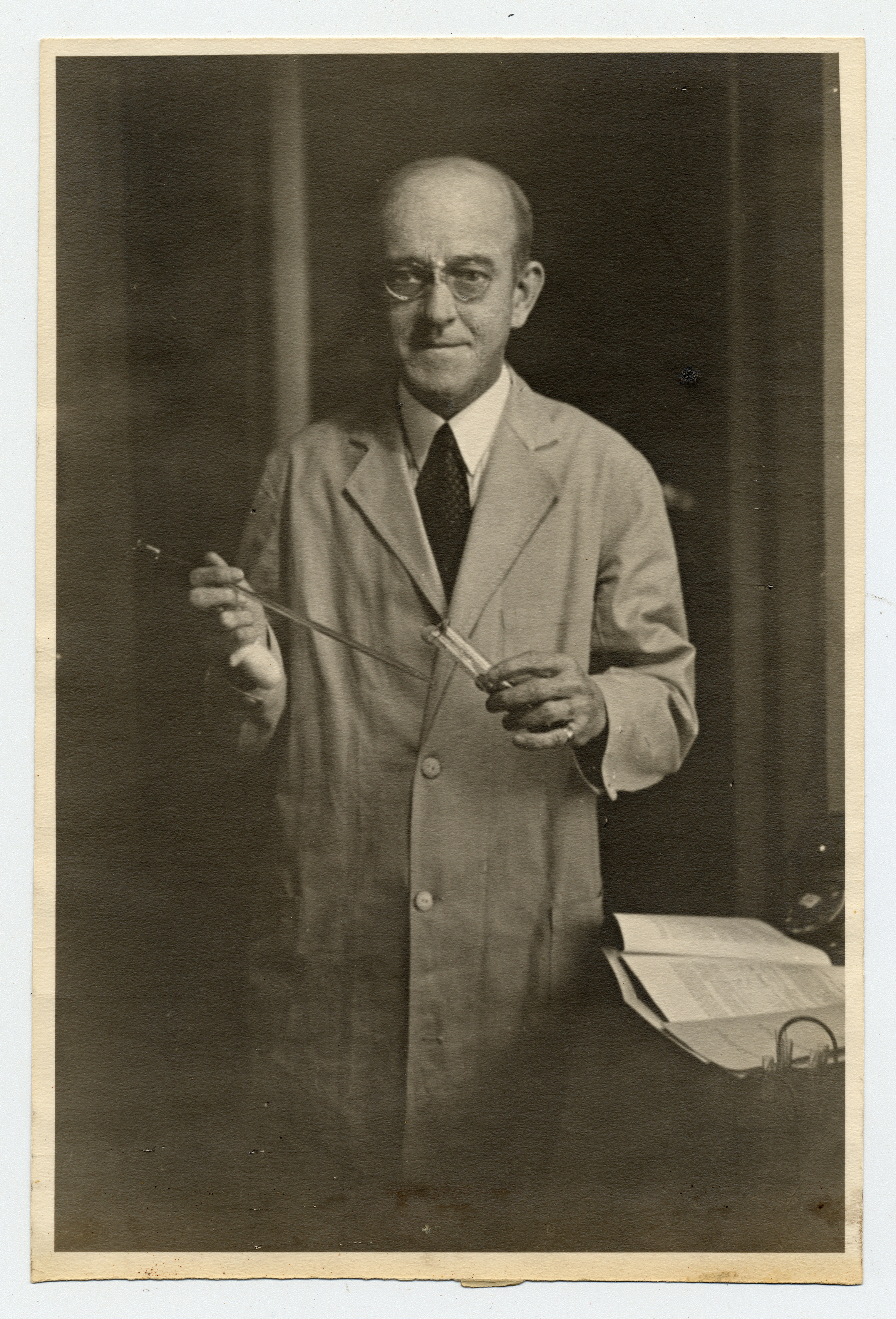 Figure 4.1.3: Oswald Avery, 1937 (Credit: Rockefeller Institute). Avery (1877-1955) was born and grew up in Halifax, Canada, before moving with his family to New York when he was 10. After completing a medical degree at Columbia University College of Physicians and Surgeons, Avery spent some time as a practising physician. In 1907 he switched his career to conduct laboratory research on bacteria. By 1913 Avery had moved to the Rockefeller Institute where he spent the next thirty-five years studying Diplococcus pneumoniae, a species of bacteria that causes pneumonia.

Avery believed that the development of an effective treatment for bacterial pneumonia rested on a detailed biochemical understanding of the pneumococcal cell. In 1923 he demonstrated that the sugar coating of pneumococci helped trigger the immune response. Based on this discovery he began looking for an agent to destroy the sugar coating of the bacteria. One of the people who helped him in this pursuit was Rene Dubos. Click here for more information about Rene Dubos. 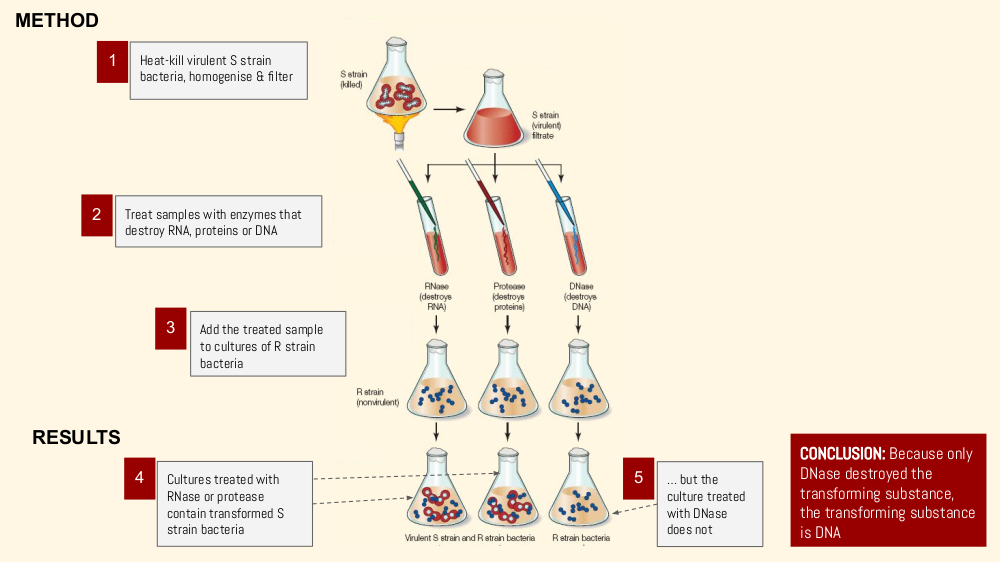 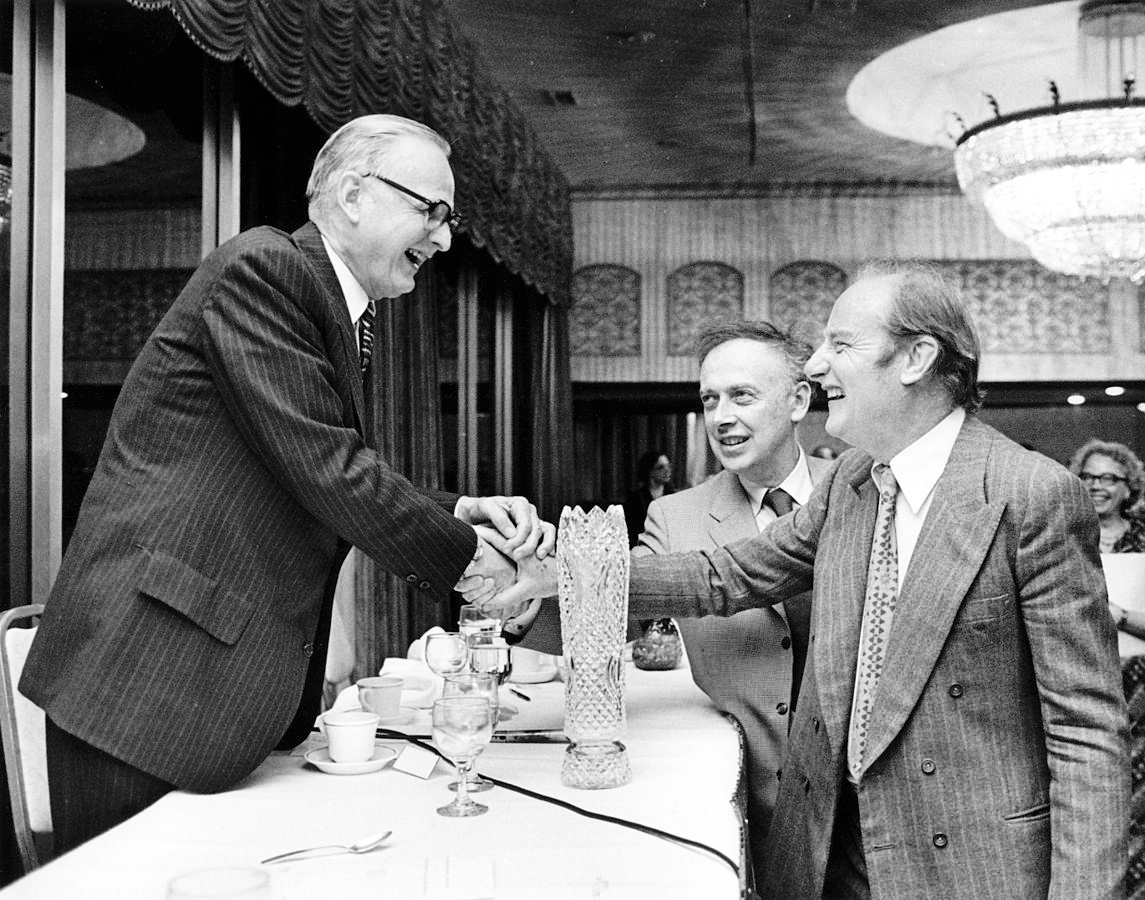 Figure 4.1.5: Photograph of Maclyn McCarty (left) shaking hands with Francis Crick and James Watson by Marjorie McCarty (Credit: Lederberg, Gotschlich). McCarty (1911-2005) was born in Indiana and completed his first degree at Stanford University and then did his medical training at Johns Hopkins. By 1940 he had moved to New York University where he began working with Avery at the Rockefeller Institute. 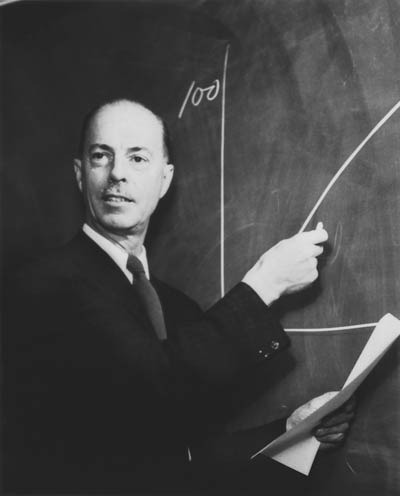 Figure 4.1.6: Colin McLeod, n.d. (Credit: Wikipedia). McLeod was born in Port Hastings, Nova Scotia, and completed a medical degree at McGill University. In 1941 he became the chair of the Department of Microbiology at New York University and soon after joined Avery's laboratory. 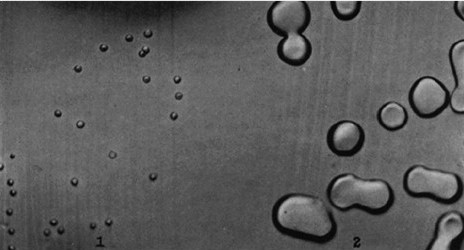 The question as to whether proteins or DNA carried genetic information remained contentious for nearly a decade. It was only resolved following a series of experiments carried out at Cold Spring Harbor Laboratory by the American geneticists Alfred Hershey and Martha Chase between 1951 and 1952. Their experiment involved tracking the transfer of proteins and DNA between a virus and its host. For their research they chose to work with the T2 bacteriophage, a type of virus that infects bacteria. One of the advantages of the bacteriophage (phage) was that, like all bacterial viruses, it had a simple structure which consisted of a protein-based outer wall and a DNA core. Moreover, it was known to reproduce by injecting its genetic material into a bacterium while leaving its protein shell outside the bacterium. Once inside the bacterium, the phage replicates by hijacking the bacterium’s reproductive machinery. This process eventually destroyed the host (Oregon State University SCARC).

While researchers knew that phages left their protein shell on the outside of the bacterium, they could not be sure whether genetic material was carried by certain proteins into the bacterium itself. Hershey and Chase proposed to settle this question by conducting two different types of experiment. In the first they tagged the phage’s DNA with a radioactive tracer called Phosphorus-32 and in the second they tagged its proteins with sulfur. Once tagged the phages were introduced into E. coli bacteria and the infected bacteria were then broken up with a blender and the phage’s protein shells were separated from their host with the help of a centrifuge. Following this measurements were made of the radiation levels in both the E. coli cells and protein shells. Contrary to the expectations of the two scientists, the experiments revealed that phage only transferred DNA, rather than protein, into the interior of bacterium. This provided conclusive evidence that DNA, not protein, was the source of genetic material. (Hershey Chase). 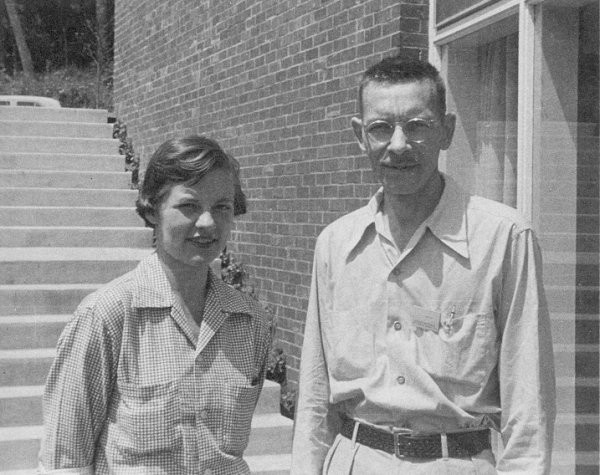 Figure 4.1.8: Martha Chase and Alfred Hershey, 1953. Photographer: Karl Maramorosh (Credit: Oregon State University Special Collections & Archives Research Center). Born in Owosso, Michigan, Hershey (1908-1997) gained a degree in chemistry and then did a doctorate in bacteriology at Michigan State University. Chase (1927-2003) was born in Cleveland, Ohio and studied the genetics of fruit flies as part of her undergraduate degree at the College of Wooster, New York. Following her degree, Chase joined Hershey at Cold Spring Harbour Laboratory (CSHL) as a research assistant in 1950 where she helped design and carry out the seminal experiments demonstrating DNA to be the transmitter of genetic information. Despite Chase’s major role in the research Hershey failed to acknowledge her contribution when he was awarded the Nobel Prize in Physiology or Medicine in 1962 on the back of the work. Chase left CSHL in 1953 to join Oak Ridge National Laboratory as a research assistant and then went to the University of Southern California where she completed a doctorate in microbiology in 1964. Sadly her scientific career was ended by a series of setbacks.

Avery, OT, MacLeod, CM, McCarty, M (1 Feb 1944) Studies on the chemical nature of the substance including transformation of pneumococcal types', The Journal of Experimental Medicine, 79, 137-58Back