By the late nineteenth century it had become common for scientists to type bacteria by cultivating them on agar media, thanks to the efforts of Agelina Hesse, and look at them under the microscope and examine their physical characteristics such as their shape and size. They could also be identified by adding certain substances to the culture media and judging the degree to which they inhibited or promoted their growth. High concentrations of salt, for example, inhibits the growth of most organisms except the Staphylococcus bacterial species (Tsang). Another method was to establish which dyes they absorbed, a technique first devised by Hans Christian Gram, a Danish biologist, in the early 1880s. His method was called Gram staining. 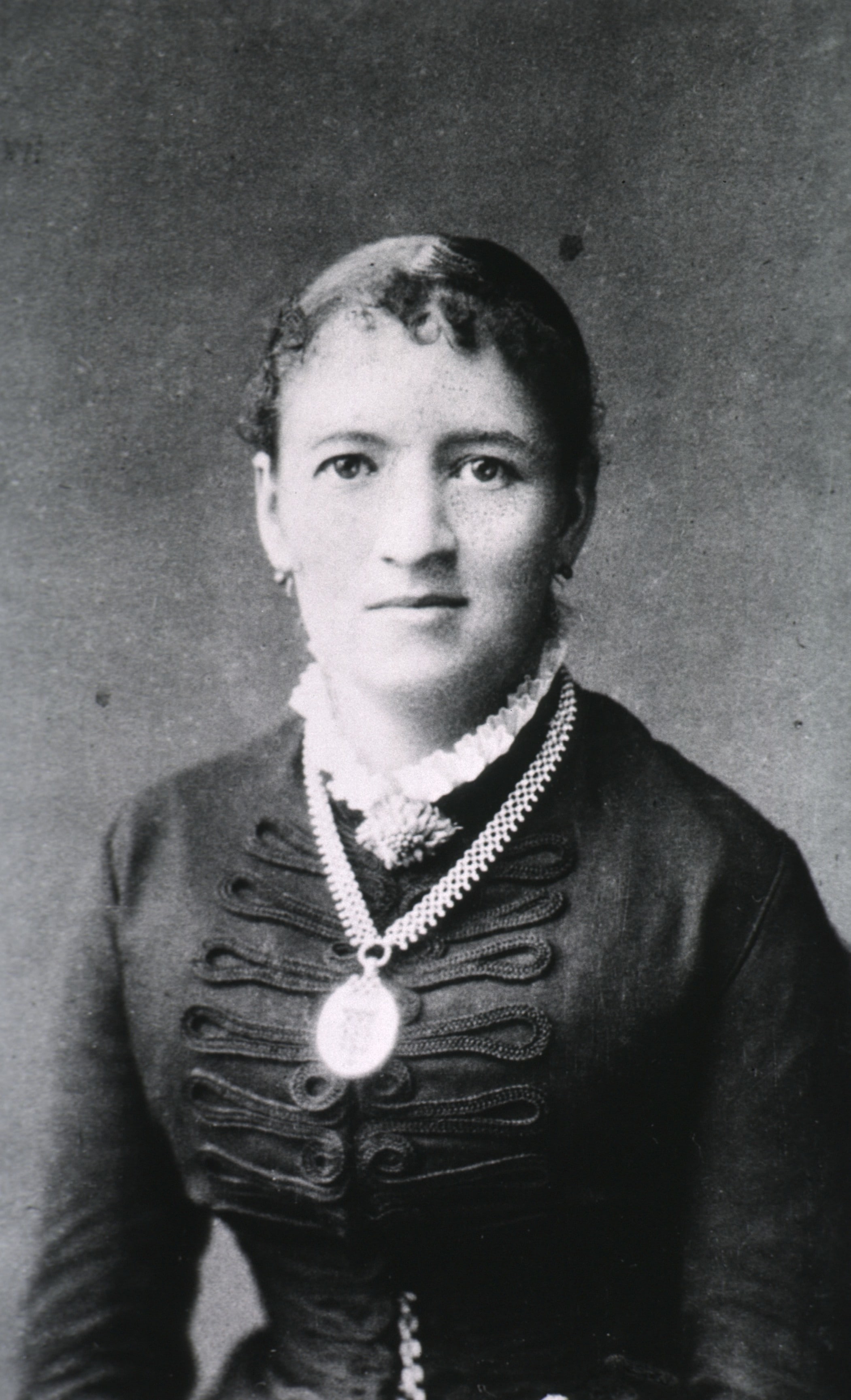 Figure 6.1.1: Photograph of Agelina Fanny Hesse, ca. 1883, credit: National Library of Medicine. The daughter of a Dutch immigrant in New York, Fanny (1850-1934) was instrumental to the adoption of agar as a growth medium for bacteria. She suggested its use while working as an unpaid assistant to her husband, Walther Hesse, a country doctor who had trained with Robert Koch to cultivate airborne microbes. For many years Agelina prepared tubes lined with growth media containing gelatin for her husband to use for his experiments. But the gelatin often turned from its solid state into a liquid on warm days which some bacteria could break down. Angelina recommended replacing the gelatin with seaweed extract agar as she had been using it for years in the kitchen to help make jam and it did not melt. It also had the advantage that it was transparent, indigestible by microorganisms and sterilisable (Connelly). 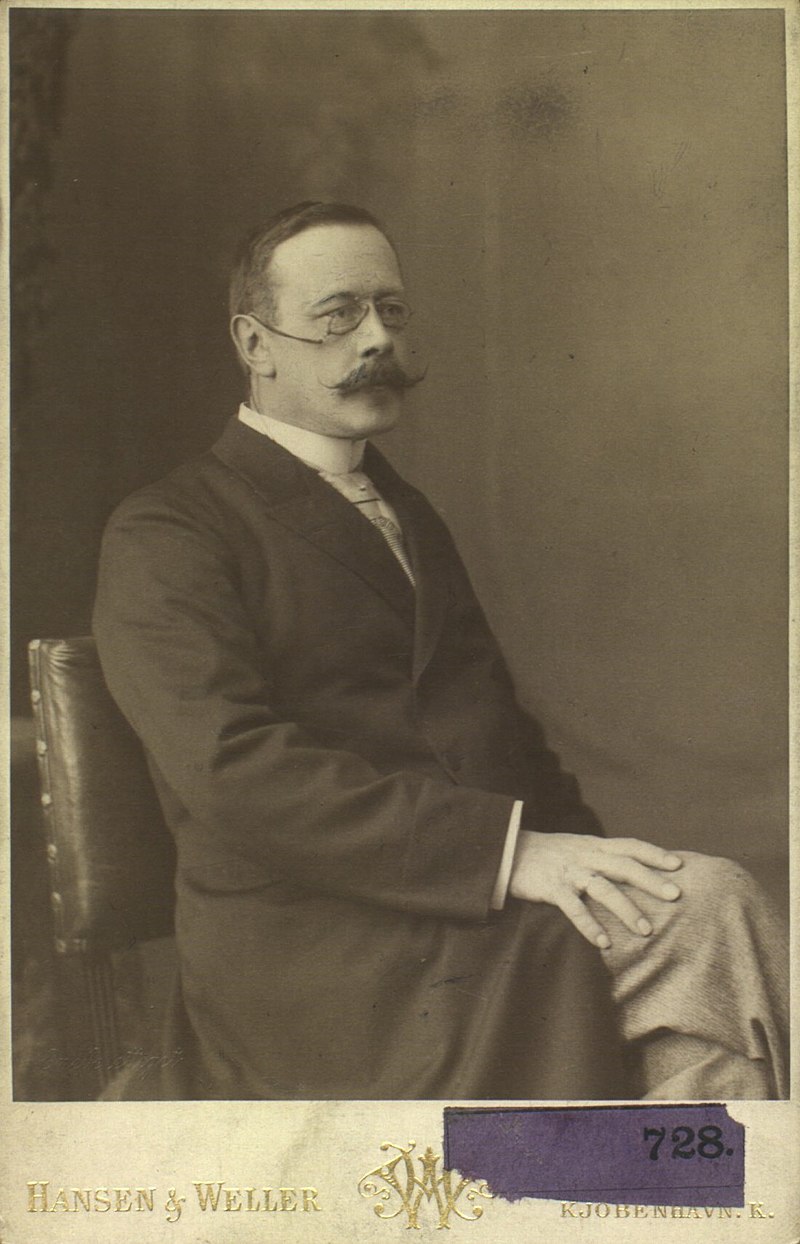 Figure 6.1.2: Photograph of Hans Christian Gram. Studio photograph of Hans Christian Gram (1853-1938) taken in 1900. Credit Hansen & Weller, Wikipedia. Interested in finding a better method to visualise bacteria under the microscope, Gram noticed that when he applied a complex of crystal violet and iodine, or methylene blue, to some bacteria they showed up in very different colours under the microscope. This was governed by the chemical composition of the bacteria cellular wall. In the case of those that contained peptidoglycan, a molecule made up sugars and amino acids, the bacteria showed up as purple or brown. Those that did not contain peptidoglycan did not take up the dye and appeared red. Based on this, Gram devised a classification system with his colleague Carl Friedländer which grouped bacteria into two large groups: gram-positive and gram-negative bacteria. One of the advantages of the method was that it yielded much quicker results than culturing.

Identifying bacteria entered a new era with the development of serotyping in the 1920s. The foundations for this technique were laid in 1896 when Georges-Ferdinand Widal, a French-Algerian Jewish physician working in Paris, devised a diagnostic test for typhoid after noticing clumps of cells formed when he added small drops of serum taken from an individual infected with typhoid to cultures of Salmonella enterica, a pathogen that can cause fever, abdominal pain, diarrhoea and sometimes vomiting. Such clumping, called agglutination, was easy to spot with the naked eye. The clumping stemmed from antibodies in the blood binding to antigens, receptors found on the surface of the bacteria. Quick and easy to perform on a glass plate, Widal's test paved the way to the development of other tests using serum taken from immunised laboratory animals, called antisera, for diagnosing syphilis, typhus and dysentery (Kirchelle).

Despite their utility, the serological diagnostic tests did not provide a way to distinguish between different bacterial strains. In 1902, however, Fred Neufield, a German bacteriologist and physician working at the Koch Institute in Berlin discovered that antisera added to pneumococcal bacteria, a common cause of pneumonia, not only resulted in the clumping of cells but also made the capsule part of bacteria swell which was easy to see under a microscope (Neufield). Based on this, he developed an elementary typing system for this bacterial species using serum taken from rabbits immunised with heat-killed pneumococci. In 1910 he and his co-workers reported they had found three immunologically distinct strains of pneumococci (Eichmann, Krause; Methot; Neufield, Handel). 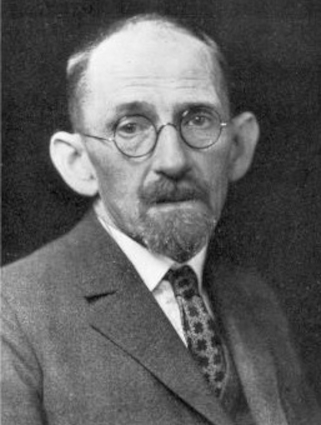 Figure 6.1.3: Photograph of Fred Neufield, 1935. Credit: Wikipedia. The son of a physician, Neufield (1869-1945) completed a doctorate in 1893 and then joined the Royal Prussian Institute of Infectious Diseases in Berlin as a deputy assistant to Robert Koch. For the first three years Neufield worked without pay but then in 1897 he was promoted to staff assistant which came with a salary From 1907 to 1912 Neufield worked at the Imperial Health Service in Berlin, following which he was returned to the Institute of Infectious Disease of which he became director in 1917. Initially Neufield concentrated his research on cholera and then turned to working on typhoid, followed by malaria and tuberculosis. His main interest, however, was serology, which he used to good effect to type pneumococci. His identification of pneumococcal serotypes helped to establish that immune serum was type specific, which helped to improve the treatment of pneumonia (Eichmann, Krause).

It did not take long before other pneumococcal strains were discovered. By 1931 a group of female scientists, working at the Department of Health in New York, reported they had found 32 serotypes in clinical isolates of pneumococci, and were using the typing system to help determine which serum therapy to give to individual patients (Cooper et al). In addition to being a useful tool for selecting the right therapy, serotyping also provided an important epidemiological method for tracking the prevalence of various pneumococcal serotypes, where they had spread and their invasiveness. It also played a key role in the development of pneumococcal vaccines. 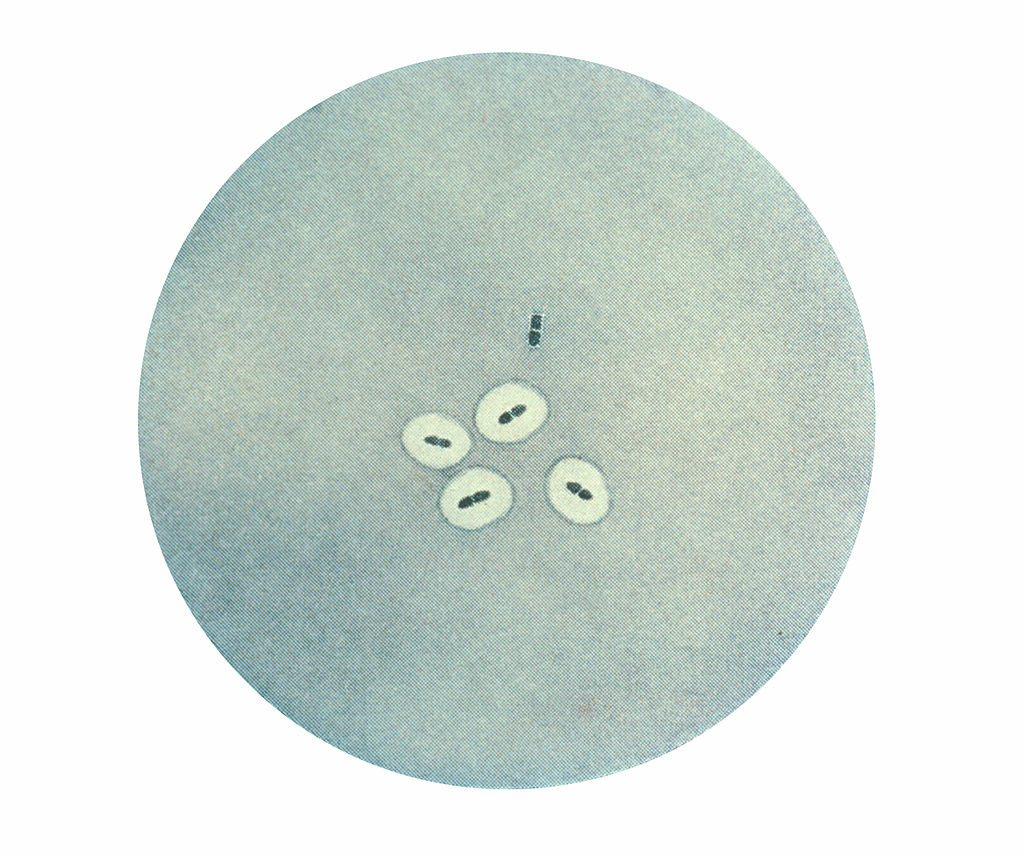 Figure 6.1.4: Photomicrograph taken of Streptococcus pneumoniae taken after a serotyping test is performed. Credit: Wikiwand. Notice the capsular swelling in the five bacteria at the bottom and the smaller bacteria at the top which have no swelling. The swelling, which appears to be opaque, is indicative of a positive reaction with antibodies in the serum.

Serotyping soon spread beyond being used to distinguish different pneumococci groups, to also being deployed to identify different strains of Streptococci, bacteria that cause many disorders including pneumonia, sepsis and wound infections (Lancefield) and Salmonella, one of the most common causes of food poisoning (Salmonella Subcommittee). 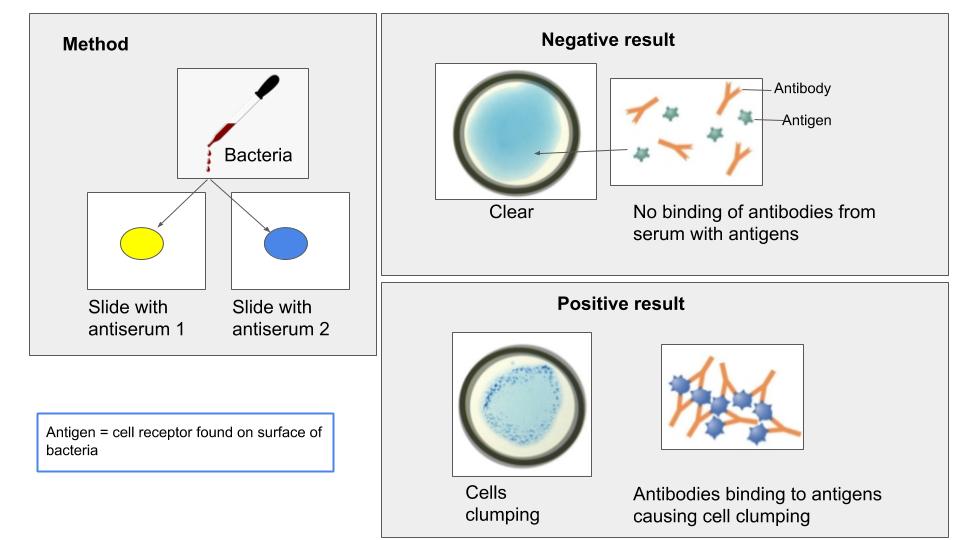 Microbiologists used serotyping to group similar isolates together into particular type classes based on what kinds of antigens were detected on their surfaces. This was important for classification purposes. One of the first classification schemes was developed for Salmonella by Philip Bruce White . With the taxonomy of Salmonella in complete disarray in the 1920s, whereby the same name was being used for several distinct organisms, White set out to rectify the problem using serotyping. In 1926 he published the first schema for classifying Salmonella using this method. His Salmonella schema was subsequently reorganised and systematised as well as further extended by Fritz Kaufmann (1899-1978), a microbiologist at State Serum Institute in Copenhagen. This formed the basis for what is now known as the Kaufmann-White Schema which classified Salmonella based on lipopolysaccharides (O antigen) or H (flagella antigen). The scheme was adopted by the Committee on Salmonella and published in 1934. By this time the schema listed 44 serotypes and bioserotypes (Salmonella Subcommittee). Similar approaches were developed for E. coli based on O antigen and K (capsule) antigens. K or capsule antigens were classically heat-stable and made of polysaccharides. 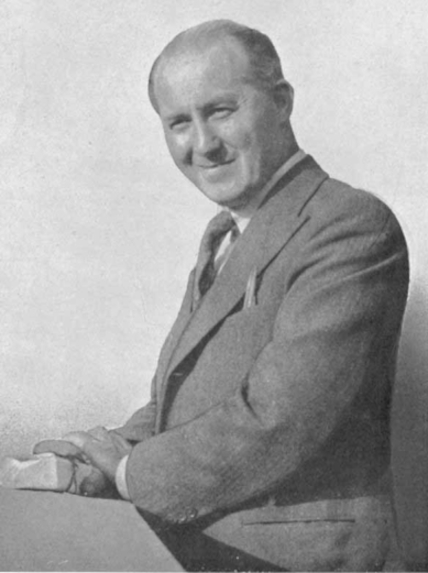 Figure 6.1.6: Philip Bruce White, FRS (1891-1949), credit: Hartley. White was born in Bangor and completed a degree in botany and zoology at University College of North Wales in 1915. Unable to sign up for combat in World War I because of an accident which permanently damaged his left hand, he got a position in the diagnosis department at the Lister Institute in London where he gained experience in bacteriology. He first began studying the Salmonella species when he was appointed in 1920 to work on the Food Poisoning Investigation under William G Savage which was sponsored jointly by the Ministry of Health and the Medical Research Council. White later made significant contributions to the classification of cholera organisms.

Serum was not the only tool used to type bacterial strains. So too were bacteriophages (phages for short), viruses which infect bacteria. One of the advantages with phages is that each type is very selective in which bacteria it will attack. Phage typing goes back to 1921 when Oskar Bail, Chair of Hygiene and Bacteriology at the German University of Prague, suggested that phages could be used to differentiate between bacteria. Four years later, Kurt Marcuse hypothesised that phages attacked specific antigenic points on the surface of bacteria which could help with typing.

By 1926 Curt Sonnenschein, a medically trained bacteriologist at Cologne's Institute of Hygiene, had demonstrated that phages could help in the rapid identification of pathogens associated with enteric diseases that were either difficult or impossible to identify with serotyping. His work opened the way to the adoption of phage typing by many bacteriological centres in Germany and Hungary. Despite their pioneering work, the German scientists were largely forgotten following the rise of the Nazi regime (Kirchelle).

Phage typing soon spread beyond Germany and Hungary and in the 1930s the Central Public Health Laboratory in Colindale, London, began to develop international phage typing sets for Salmonella typhi, Salmonella paratyphi, Salmonella typhimurium, and Staphylococcus aureus (Kirchelle). By 1946 the Laboratory had adopted phage typing as routine epidemiological tool for investigations into outbreaks of staphylococcal infections behind food poisoning, wound infection and pemphigus neonatorum, a disease of the newborn. Following this, many laboratories around the world adopted the phage typing techniques developed by the Laboratory and in 1953 it helped establish an International Subcommittee to standardise the procedure (Wentworth). Phage typing played a central role in tracking and controlling the transmission of Staphylococcus aureus, which by the 1950s had become a global source of hospital infections and mortality (Hillier). 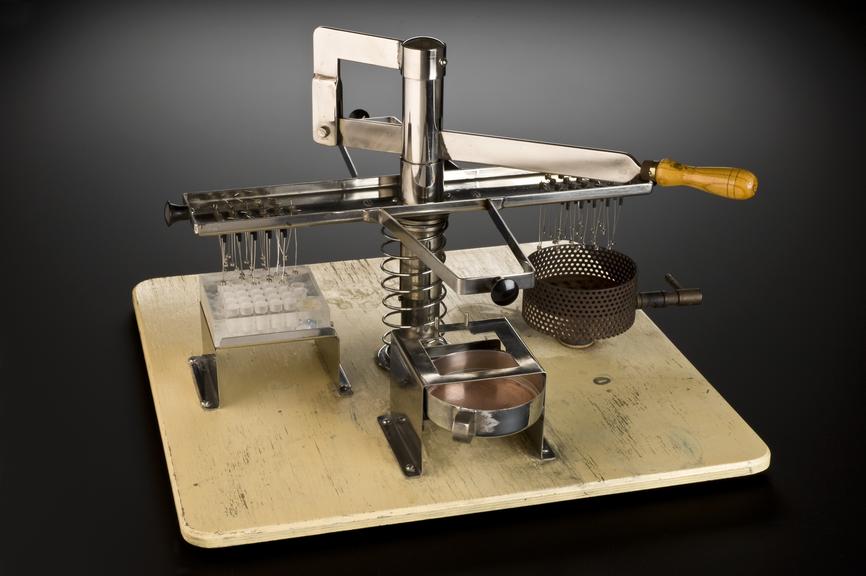 Figure 6.1.7: Phage typing machine. This machine was developed at the Public Health Laboratory Service in London in 1959 and was used to identify salmonella strains. Credit: Science Museum. 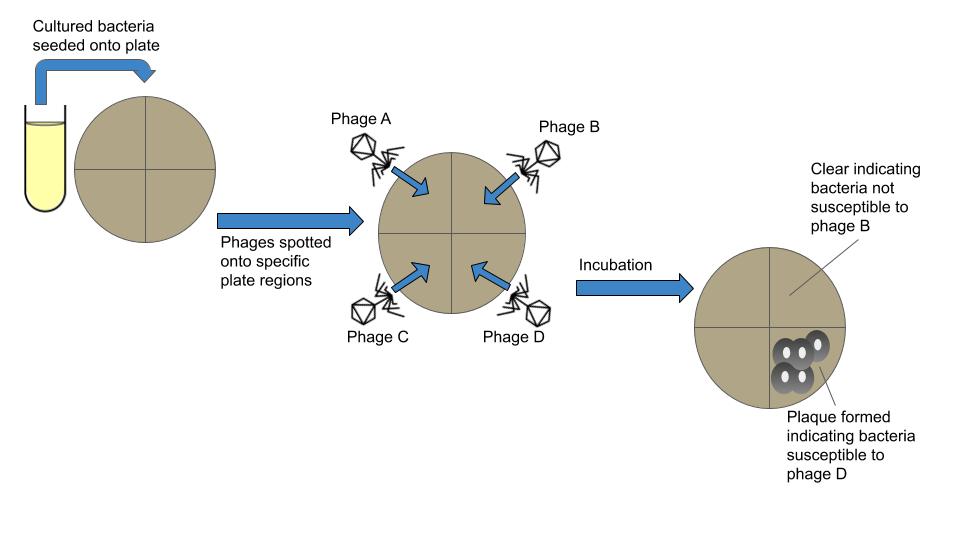 Both serotyping and phage typing were a core component of public health monitoring into the 1960s. Yet, both methods had some limitations. Firstly, the preparation of antisera and phages was time consuming and difficult to standardise. Phage typing also required the maintenance of an extensive collection of strains. Another difficulty was both serotyping and phage typing had a low throughput and were relatively slow which limited their utility as a tool for surveillance and epidemiological investigations. On top of these problems the methods did not alway provide results that were easy to interpret or compare.

Cooper, Georgia, Rosenstein, Carolyn, Walter, Annabel, Peizer, Lenore (31 March 1932), ‘The further separation of types among the pneumococci hitherto included in group IV and the development of therapeutic antisera for these types', The Journal of Experimental Medicine, 55/4, 531-54.Back

Eichmann, K, Krause RM (2013) ‘Fred Neufeld and pneumococcal serotypes: foundations for the discovery of the transforming principle', Cellular and Molecular Life Sciences, 70, 2225–36.Back

Hillier K (2006), ‘Babies and Bacteria: Phage Typing, Bacteriologists, and the Birth of Infection Control', Bulletin History of Medicine, 80, 733-61.Back

Lancefield Rebecca C (29 Nov 1932) , ‘A serological differentiation of human and other groups of hemolytic streptococci', The Journal of Experimental Medicine, 57/4, 571–95.Back

Methot P-O (2016), ‘Bacterial transformation and the origins of epidemics in the interwar period: The epidemiological significance of Fred Griffith's "Transforming Experiment"', Journal of the History of Biology, 49, 311-58.Back