Shifting to resistance testing - the start of the molecular era

All the early AST methods, which measured the growth of a pathogen in the presence of an antimicrobial drug, relied on phenotyping, an approach which looks at the observable characteristics of an organism. The advantage of using phenotyping is that the characteristics can be easily observed, scored and measured without help from expensive technology. It is also cheap to perform.

Yet the method is not perfect. Not only is it time-consuming, it is also poor at identifying slow-growing organisms and ones that have complex nutritional requirements. Interrupting test results also requires a great deal of subjective judgement (Tang et al). Another limitation is that often several tests need to be performed in order to get an accurate susceptibility profile (Bergeron, Ouellette).

A new chapter opened up during the 1970s with the arrival of new molecular techniques for the amplification and sequencing of DNA. Armed with these tools, borrowed from the molecular biology laboratory, clinical and medical microbiologists now had the means to move away from merely testing for susceptibility to also testing for resistance. The new approach, known as genotyping, looked for the presence or absence of acquired genes or mutations in the genomes of pathogens that make them resistant to one or more of a given class of antimicrobial drugs. One of the attractions with genotyping was that it could be carried out directly on raw patient samples without the prior need for culturing the pathogen. All that was needed was to extract the DNA from isolated strains. This made it potentially much faster and accurate than conventional methods (Bergeron, Ouellette; Atsbaha et al).

One of the first molecular techniques adopted for tracking the evolution and spread of AMR was to fingerprint plasmids, small autonomous pieces of DNA found in bacteria. Plasmids were particularly helpful for this purpose because they carry most of the genes for antimicrobial resistance. The fingerprinting process involved sequencing DNA from the plasmids using gel electrophoresis. Armed with this technique, clinical microbiologists could monitor the evolution of plasmids during outbreaks of infection and establish the presence and spread of transposons - genetic elements that jump positions in the genome - which carry drug resistance determinants in bacteria. Relatively simple, cheap and quick to perform, plasmid fingerprinting had become a common procedure for clinical microbial laboratories by the early 1970s to identify epidemic strains of bacteria and plasmids. It proved particularly useful for monitoring the spread of multiresistant bacteria responsible for hospital infections and outbreaks of food poisoning in the community setting caused by salmonella (Farrar). 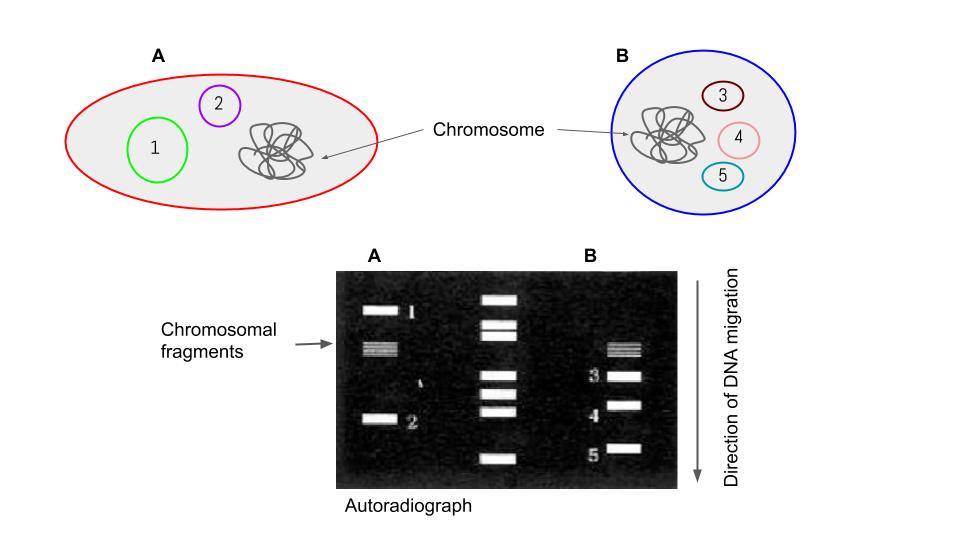 Figure 7.2.1: Diagram showing the plasmid fingerprinting technique using gel electrophoresis. The red oval on the left represents a typical gram-negative rod bacteria and the blue circle on the right represents a typical gram-positive coccus. The coloured circles with numbers show the different plasmids inside the bacteria. In order to perform the fingerprint the bacterial cell is broken down with a detergent substance to remove the chromosomal DNA and this is then placed on a gel slab and an electric current is applied to help separate the protein molecules contained in the DNA. In the final stage an x-ray film is placed on the gel to produce an autoradiograph of the DNA sequence. Diagram adapted from Arbeit, Tenover, Goering.

Despite its utility, plasmid fingerprinting had some limitations. In particular, it was not sufficiently sensitive to monitor specific genes (Tenover). A much better method to track specific genes was through DNA probes to AMR genes. The first such probes were developed in 1982 by Mary Fling, Leslie Walton and Lynn Elwell based in the Wellcome Research Laboratories in North Carolina. Their probes proved particularly useful for the rapid detection of a specific gene in clinical isolates relating to trimethoprim resistance (Fling, Walton, Elwell). Various DNA probes were thereafter developed for a wide variety of resistance genes for other types of antibiotics. Such probes soon became the gold standard for tracking the emergence of new antibiotic resistance genes and their movement in hospital and community settings (Tenover). 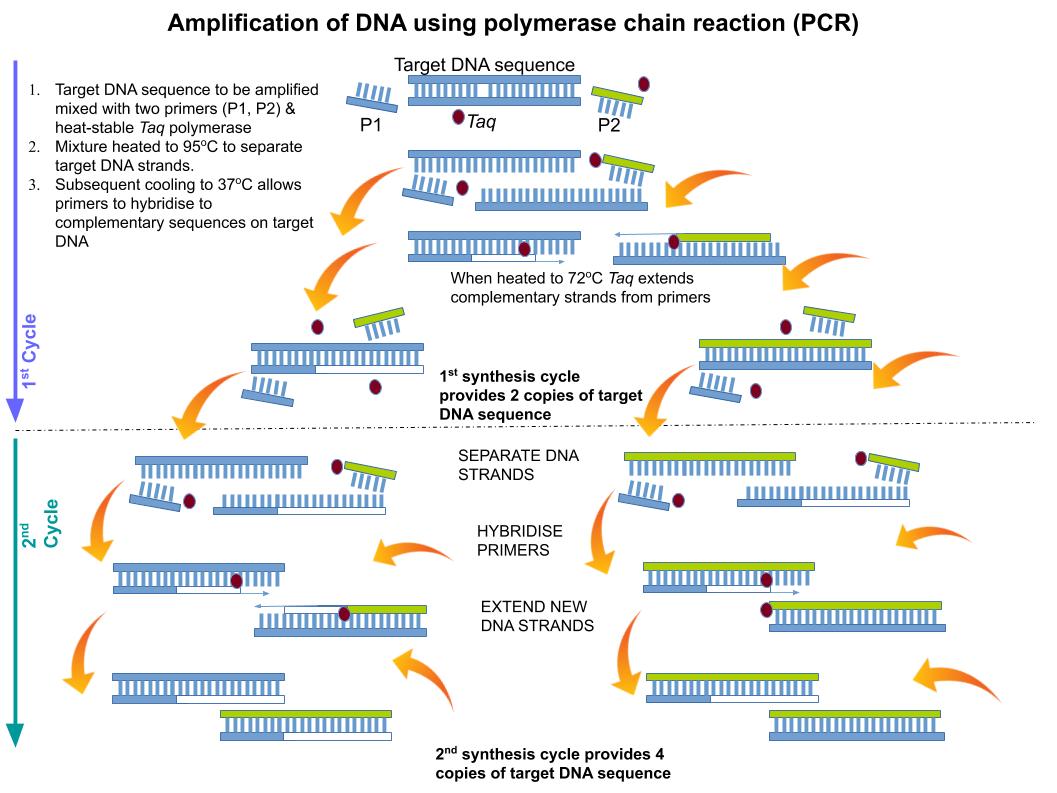 Detecting AMR genes was also radically improved with the emergence of Polymerase Chain Reaction. Known as PCR for short, this technique made it possible to replicate small quantities of DNA on an unprecedented scale. First demonstrated in 1983, PCR proved particularly beneficial for cloning DNA from pathogens that are difficult to culture under in vitro conditions or take a long time to culture. It was also helpful for detecting infectious organisms that were only present in low quantities in clinical samples. In 1988 the multiplex PCR was introduced. This opened up the means to detect several resistance markers at once.

By the 1990s PCR was being used with increasing frequency to detect and type resistance genes from bacteria as well as from other microbes like viruses (Tenover, Popovic, Olsvik). Its use further increased over the next decade as a result of the introduction of real-time PCR, in 1992, which uses fluorescent dyes to monitor the accumulation of the PCR in real time (RT-PCR). The new technique made it possible to simultaneously amplify specific DNA sequences and detect the product from the amplification. DNA sequences could also be detected without opening the reaction tube, which reduced the risk of contamination (Higuchi et al).

Another improvement was introduced in 2000 called loop mediated isothermal amplification (LAMP). Unlike conventional PCR the LAMP process does not require the use of a thermal cycler because it amplifies DNA in a single reaction at a constant temperature. It also does not need the high-temperature denaturation step undertaken in PCR or a separate method to analyse the product. LAMP produces considerably larger amounts of DNA than PCR, up to 50 times more, and it can be used to amplify RNA and microRNAs. Both the introduction of RT-PCR and LAMP made the DNA amplification process much faster, required much less labour and more amenable to automation (Higuchi et al).

Two of the key advantages that PCR and probe technology brought to resistance testing was the speed with which they provided results as well as their enormous sensitivity. By the late 1990s, a number of specific DNA probes and PCR amplification primers had been created for almost every pathogenic organism, making them a useful tool for analysing large numbers of samples in epidemiologic surveys (Bergeron, Ouellette).

Where DNA probes and PCR proved particularly useful was for detecting resistance genes in organisms where AST results were unclear. The two methods also helped clarify which mechanism was responsible for resistance. Any number of mechanisms could lie behind the resistance. This could be the presence of an enzyme able to inactivate the antimicrobial drug; a mutation in the target that may reduce the entrance of the drug into the bacterial cells; a protein that serves as a pump to transport noxious substances like antibiotics out of the bacterium; or an overproduction of the target of the antibiotic (Tenover, Popovic, Olsvik; Fluit, Visser, Schmitz).

Both DNA probes and PCR are designed to detect and identify a single gene or a limited number of genes simultaneously. Over the last couple of years another technology, called the DNA microarray, has appeared which has made it possible to detect huge numbers of genes, such as those involved in AMR, very quickly. Developed in the mid-1990s, the DNA microarray (also known as the DNA chip) consists of a solid support, usually made of glass or silicon, to which tiny spots of DNA are attached in an organised pre-determined grid fashion. Each spot contains a known DNA sequence or gene, which acts as a probe to detect gene expression.

The microarray exploits the binding reaction between complementary DNA (cDNA) and its base-pair, each of which are labelled with fluorescent tags of a different colour. Once the cDNA molecules have bound to the DNA probes on the slide, a process known as hybridisation, the microarray is scanned with a laser and captured with a camera to measure the expression of each gene on the slide, which is determined by the fluorescent pattern. The data is stored on a computer and provides results immediately. One of the advantages with the microarray is that it makes it possible to analyse the expression of tens of thousands of genes that can contribute to antibiotic resistance simultaneously in real-time. 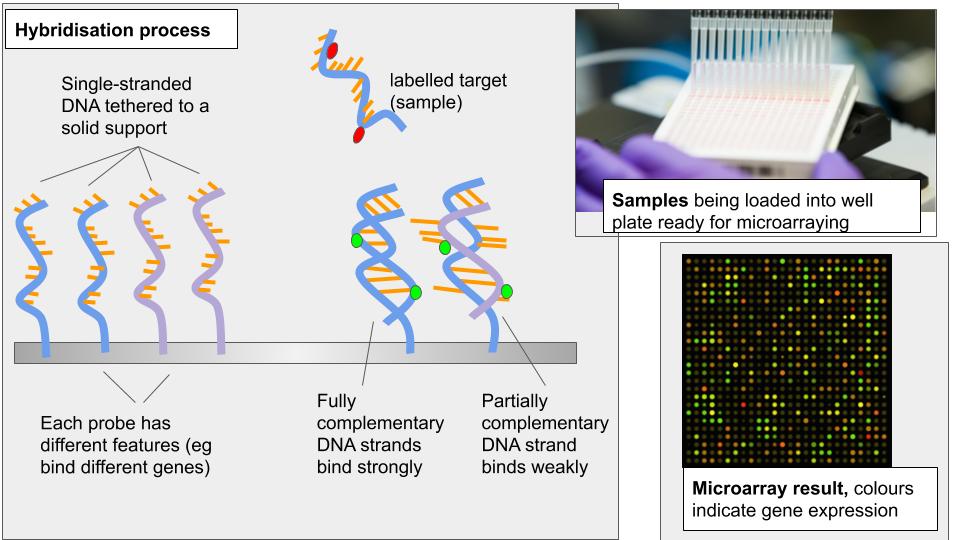 Figure 7.2.3 Diagram showing the a microarray card with hybridisation process and result.

The fact that DNA microarrays are customisable and can identify thousands of genes in one go is particularly helpful in the case of bacteria that are resistant to multiple drugs and increasingly resistant to most available antibiotics. A key group in this category are Gram negative bacteria, which are associated with infections like pneumonia, bloodstream infections, wound or surgical site infections, and meningitis in healthcare settings. Gram negative bacteria include Klebsiella, Acinetobacter, Pseudomonas aeruginosa, and E. coli which are considered to be highly dangerous threats to human life (Longitudinal; WHO). These bacteria often carry many different multidrug resistance determinants. DNA microarrays provide a means to detect multiple resistance genes to multiple classes of antibiotic in one go. Able to provide results in a matter of hours, DNA microarrays can help reduce the risk of administering inappropriate antibiotics which will be of little use to patients and increase the spread of resistant strains (Behzadi).

The construction of DNA microarrays relies on extensive knowledge of local strains and resistance genes which has been accumulating in recent years as a result of multiple genomic studies of different pathogens. This genomic data is important for designing effective probes for the microarrays.

Farrar, WE (July 1983), 'Molecular Analysis of Plasmids in Epidemiologic Investigation', Journal of Infectious Diseases, 148/1, 1-6.Back

WHO (27 Feb 2017) 'List of bacteria for which new antibiotics are urgently needed'.Back