Until the late 1950s most scientists assumed that the appearance of AMR was the result of a predictable process, whereby bacteria spontaneously developed drug resistance and then the resistant strain selectively multiplied in the presence of a drug. It soon became clear, however, that another mechanism was also at work. This was brought to light by a team of Japanese scientists led by Tsutomu Watanabe called in to investigate a series of outbreaks of dysentery caused by Shigella bacteria following the Second World War. 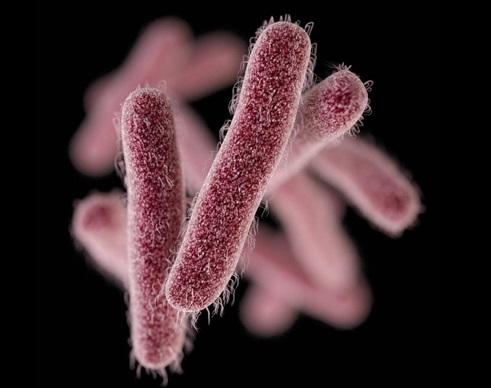 Figure 4.3.1: Electron migrograph of Shigella bacteria (Credit US Centers for Disease Control). Shigella are a species of bacteria that cause diarrhoeal diseases. The bacteria are highly contagious and are commonly spread through person-to-person contact and contaminated food, water or hands. Shigella can cause dysentery, an inflammatory disease of the intestine, which causes intense abdominal cramps, fever and severe diarrhoea with blood or mucous. Those infected with Shigella typically develop symptoms one to two days after exposure to the bacteria. These symptoms can last between five and seven days. 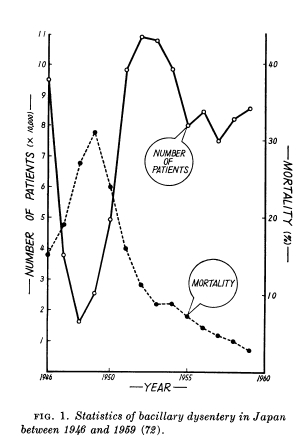 Figure 4.3.2: Rates of bacterial dysentery in Japan 1948-1959 (Credit: Watanabe, 1963). During the late 1940s post-war Japan, then experiencing high rates of deprivation and dislocation as well as a break-down in sanitary services, was hit by a series of epidemics of bacillary dysentery caused by Shigella. Initially sulpha drugs were used to combat the problem, but the bacteria soon became resistant to them so two newer antibiotics, streptomycin and tetracycline, were administered. By 1953, however, Shigella had developed resistance to both of them. Thereafter Shigella developed resistance to additional antibiotics with increasing frequency every year. The emergence of resistance to multiple drugs among Shigella posed a serious challenge to the treatment of dysentery in Japan and was a cause for concern around the world. 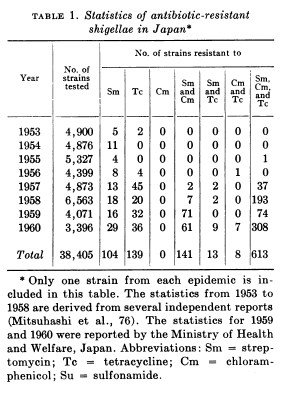 Figure 4.3.3: Trend of antibiotic resistance among Shigella samples in Japan (Credit: Watanabe, 1963). This table shows the steady increase in multiple resistance to different antibiotics from 1957 to 1960 among Shigella strains cultured by Watanabe and colleagues. The figures in the table demonstrate that multiple resistance did not arise in a series of discrete steps, and that bacteria typically developed a group of resistances simultaneously against some or all of the drugs. 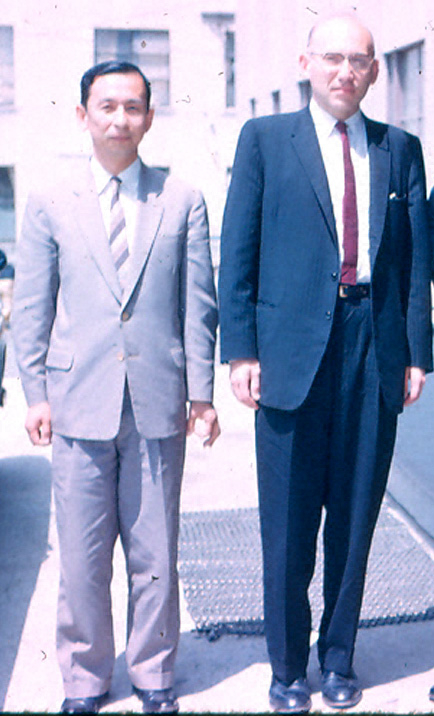 Figure 4.3.4: Tsutomu Watanabe can be seen here on the left with Joshua Lederberg, Keito University, Tokyo, May 10 1962 (Credit: Esther M Zimmer Lederberg Memorial Website). Like Joshua Lederberg, Watanabe trained with Francis Ryan, a microbiologist at Columbia University. Ryan spent a year in Tokyo in 1955 at the Institute of Microbiology where he gave the first formal course in microbial genetics in Japan.

What was striking about the work of the Japanese team was that they found a number of strains of the bacteria isolated from the patients with dysentery to be simultaneously resistant to four antibiotics - streptomycin, tetracycline, sulphonamide and chloramphenicol. In addition, some of the E. coli bacteria collected from the patients also showed multiple resistance. The team then noticed another unusual pattern - some patients who at the beginning of treatment provided specimens of antibiotic-sensitive bacteria went on to excrete both Shigella and E. coli that were resistant to multiple antibiotics. 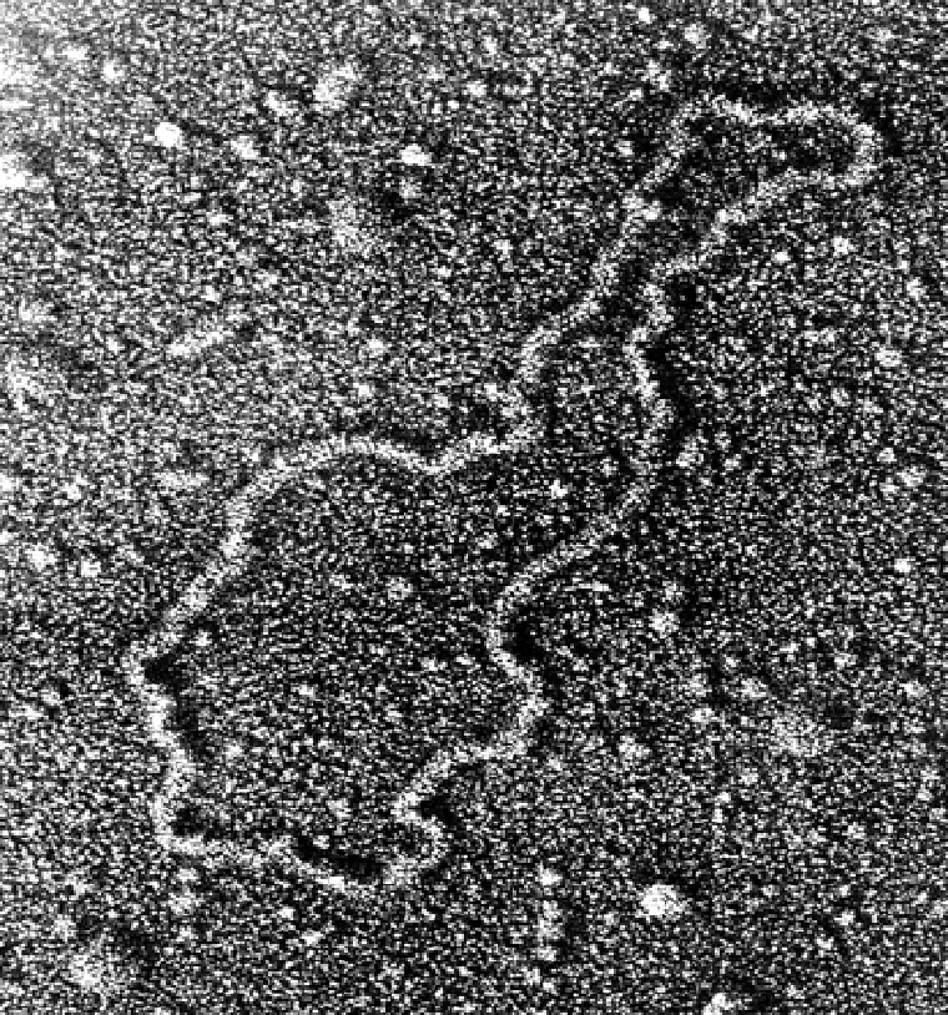 Figure 4.3.5: Electron microscope of a plamid. Credit: Stanley Cohen. A plasmid is a small double-stranded unit of DNA that is found in bacterial cells. Independent of the chromosome, plasmids are capable of self-replication. Plasmids come in many different sizes and transmit genetic material from one bacterium to another. This can include genes that confer resistance against antibiotics.

Keen to understand what was going on, the Japanese scientists conducted a series of experiments which involved simply mixing liquid cultures of the resistant Shigella with E. coli that were sensitive to antibiotics in a test tube and then plating up the cultures on medium containing the relevant antibiotics. Once again the E. coli were found to have developed antibiotic resistance. Similarly sensitive Shigella were found to develop resistance when mixed with resistant E. coli. What was disturbing about these findings was that it demonstrated that one species of bacteria could transfer antibiotic resistance to another and the genes for antibiotic resistance could be transferred all together at one stroke. Watanabe and his colleagues concluded that the transfer of genes between Shigella and E. coli took place in the intestinal tract of patients when exposed to antibiotics (Watanabe, Fukasawa; Watanabe, 1967; Bowater; Falkow).

What the exact mechanism was that enabled the transfer of genes remained a mystery until 1959 when Watanabe and other Japanese colleagues isolated an extrachromosomal DNA molecule from Shigella that conferred resistance to multiple antibiotics in different bacteria. Originally this molecule was called a 'resistance transfer factor'. It was subsequently called a 'plasmid'. Scientists subsequently found that resistance genes only transferred when bacterial cells came into contact with each other, as happens in bacterial conjugation (Davies, 1995).

Although the Japanese findings were initially greeted with strong scepticism, it did not take long before scientists elsewhere also began to find R factors in other bacteria. One of the first to do so was Naomi Datta, who in 1959 was appointed to investigate the origin of a severe outbreak of Salmonella typhimurium infection at Hammersmith Hospital in London. This was a huge operation. It involved culturing stool specimens from every patient admitted to the hospital as well as all the medical, nursing, domestic and kitchen staff from mid May to the end of July 1959. A total of 252 people were found to be excreting Salmonella typhimurium (Datta, Pridie, Anderson). 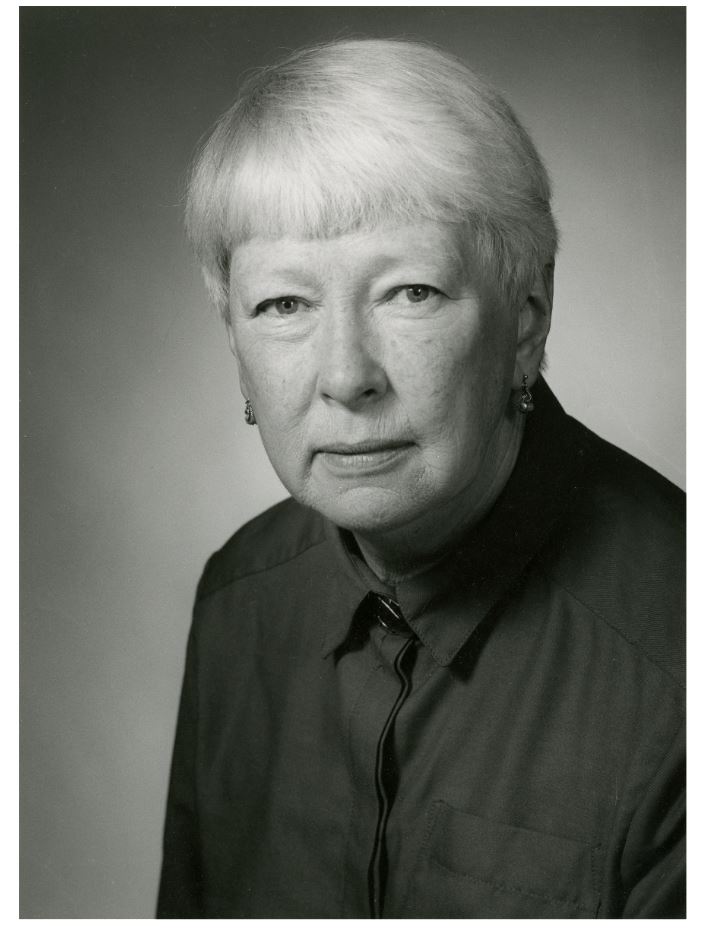 Figure 4.3.6: Naomi Datta (nee Goddard), May 1998 (Credit: Godfrey Argent, Royal Society). Born in London, Datta qualified as a doctor at West London Medical School (now University College London) in 1946 and then trained as a bacteriologist. Following her studies, Datta combined bringing up her children while working for a decade as a senior bacteriologist at the Public Health Laboratory Service in Colindale, North London. In the late 1950s she was appointed assistant lecturer in bacteriology at the Royal Postgraduate Medical School in Hammersmith, West London.

In 1961 Datta and her team began testing 309 of the cultures they had stored from the Hammersmith Hospital study for their sensitivity to various antibiotics. They found fifteen strains of Salmonella typhimurium to be resistant to streptomycin, tetracycline and sulphathiazole. These had been isolated from eight patients, none of whom had been given any of the three drugs. Not finding such drug-resistance in earlier cultures taken from the patients it appeared that the antibiotic resistance had developed over time. None of the patients had had any direct contact with each other as they had been accommodated in different wards. In nearly all instances the resistance to the three drugs appeared simultaneously. Datta then repeated a similar experiment to the one conducted by the Japanese scientists. In her case she mixed the Salmonella typhimurium that was resistant to the three drugs with a strain of Shigella sonnei known to be sensitive to the antibiotics. This resulted in the triple-drug resistance being transferred to Shigella sonnei. Like her Japanese counterparts Datta concluded that the genes for resistance had probably been transferred by cell conjugation with the help of a non-chromosomal factor, or R factor (Datta). 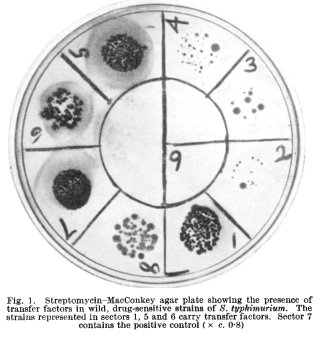 Figure 4.3.7: This shows the results from a screening test that was developed by Anderson and colleagues to detect transfer factors in strains of enterobacteriaceae sensitive to antibiotics. The test helped to show that transfer factors and R-determinants are initially independent (Credit: Anderson, 1965).

In 1963 Datta began a collaboration with E S Anderson who was director of the Enteric Reference Laboratory (ERL) in London. Together with other colleagues, Datta and Anderson began tracking the incidence of drug resistance among cultures of Salmonella typhimurium taken from both humans and animals sent to the ERL. Part of this research was aimed at furthering knowledge about the mechanism behind the transfer of resistance in bacteria and how the R transfer factor worked. By now it was believed that the R transfer factor consisted of two components: 1) a fragment of genetic material that conferred drug resistance, known as the R determinant; and 2) the transfer factor that was thought to be necessary for transferring the genetic material between bacteria. The Salmonella typhimurium study, however, established that the R-determinant and transfer factor could in fact exist and replicate independently. Overall, the research suggested that once initiated, resistance transfer was self-sustaining and that R factors were able to persist even without the presence of antibiotics (Anderson, 1965; Anderson, 1968).

In addition to finding out more about how resistance was transferred, the ERL study revealed that there had been a rapid emergence of AMR in enterobacteria as a result of the increasing use of antibiotics. At the outset of the study, in 1963, only 3 per cent of the Salmonella typhimurium strains received by the Laboratory were found to be drug resistant. By 1964, however, the proportion of resistant strains had risen to 21 per cent. This increased to 61 per cent by 1965. Moreover, many of the strains accumulated resistance to multiple antibiotics over time. What was particularly notable was this pattern was found in strains taken from both humans and cattle. In some instances the resistant bacteria had clearly spread from calves to farm workers and veterinary surgeons and their families. When taken together with earlier observations, the results from the study suggested that transfer factors and R determinants could influence not only the ecology of the original host bacteria but also other bacteria in their environment and that of the animals colonised by the bacteria (Anderson, 1968). 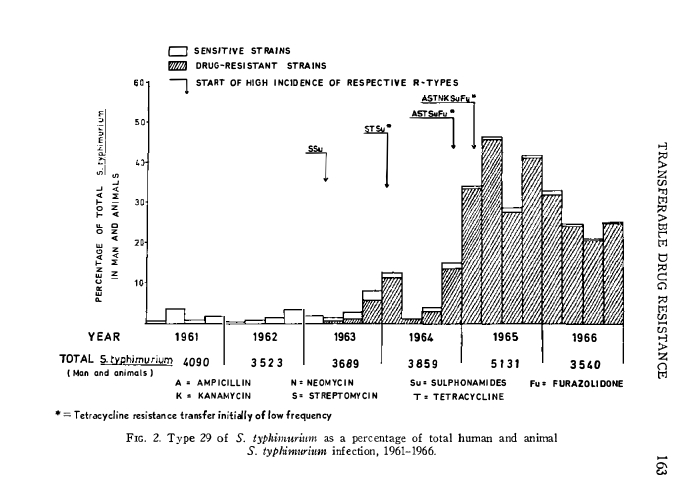 By 1968 numerous reports had been published documenting the rise of multiple resistance in different bacteria around the world. Scientists soon established that almost any kind of transmissible plasmid, a small self-replicating extrachromosomal DNA, could act as an R-factor, by now called R plasmids. A few years later research by the American microbiologist Stanley Falkow and colleagues demonstrated that when put under pressure by antibiotics, one species of bacteria could pass on plasmids containing antibiotic resistance genes to another without mating. Scientists quickly realised that there was a much greater pool of non-conjugative R-plasmids than they had originally imagined. As studies of plasmids expanded in the 1960s it became clear that antibiotic resistance genes appeared on plasmids soon after an antibiotic came into clinical use. The discovery of R plasmids and plasmid mobilisation in the microbial world had a profound impact on the understanding of AMR (Falkow). 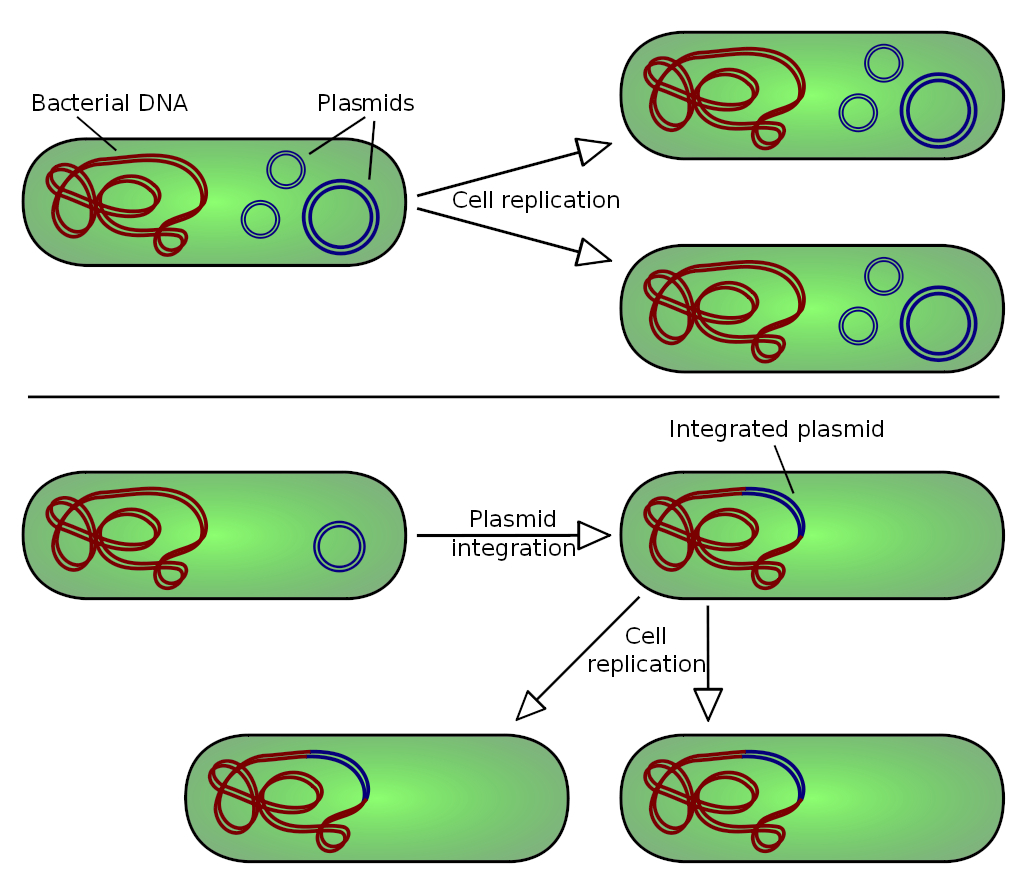 Datta, N (1962), 'Transmissible drug resistance in an epidemic strain of salmonella typhimurium, The Journal of Hygiene, 60: 301-10. Back