The history of Salvarsan, also known as arsphenamine, started in 1907 when it was synthesised by Alfred Bertheim (1879-1914), a German chemist. It was one of a number of new organic arsenic based compounds produced as part of an effort by Paul Ehrlich to discover a drug that would kill microbes but not damage the host's body tissues. Ehrlich had first developed an interest in finding such a targeted drug in the late nineteenth century, when he noticed that synthetic dyes could selectively stain specific germs in tissue cultures without touching host cells (Bosch, Rosich).

Figure 3.1.1 Paul Ehrlich, 1915 (Credit: Wellcome Images). Ehrlich (1854–1915) was born in Strehlen in Silesia, now in south-west Poland. He first began staining microscopic tissue substances as a school boy after being inspired by his cousin Carl Weigert, a renowned bacteriologist, who was the first person to stain bacteria with a dye and to use aniline pigments for histological studies and bacterial diagnostics. Ehrlich continued to be fascinated with tissue staining throughout his medical studies, which he completed in 1878. In 1891 Ehrlich was invited by Robert Koch, a German physician and microbiologist, to join the Berlin Institute of Infectious Diseases, where he became the founding director of the Institute for Serum Research and Testing. The new institute was transferred to the recently opened Institute for Experimental Therapy in Frankfurt in 1898. In 1906 Ehrlich was appointed the director of the Georg Speyer House, a private research foundation in Frankfurt. This was his base when he began the work that led to the development of Salvarsan. Ehrlich was awarded the Nobel Prize in 1908 for his work on Salvarsan and many contributions to the field of immunology

Ehrlich launched his first set of experiments to explore the therapeutic properties of various dyes in 1891. His first foray into this area was with methylene blue, a dye that he found bound strongly to the malaria parasite. While Ehrlich successfully used the dye to cure two patients with malaria, he soon abandoned work on the dye because it proved inferior to quinine, a drug that was then in widespread use for malaria. Thereafter, Ehrlich and his Japanese colleague Kiyoshi Shiga (1871–1957) evaluated hundreds of synthetic compounds against infections caused by protozoa parasites. By 1904 the two of them had discovered a dye, known as trypan red, to be effective in mice infected with trypanosoma equinum, a protozoa belonging to the trypanosoma species. But it soon became clear that some trypanosomes could develop resistance to the dye (Bosch, Rosich).

Following the work on trypan red, Ehrlich began exploring the use of Atoxyl, an arsenical compound that was used as a treatment for trypanosomiasis, sleeping sickness, from 1905. The key issue for Ehrlich was to find a way of improving the arsenical compound because it was only effective if used in high doses over a prolonged period. Such doses,however, carried a high risk of causing damage to the optic nerve which could cause blindness. Ehrlich set out to eliminate the problem by trying to modify the chemical structure of Atoxyl. This he did with the help of Bertheim. Together they synthesised more than a hundred variations of the compound. One of these was arsphenamine (Salvarsan). The drug was initially named '606' because it was the sixth in the sixth group of compounds produced (Bosch, Rosich). 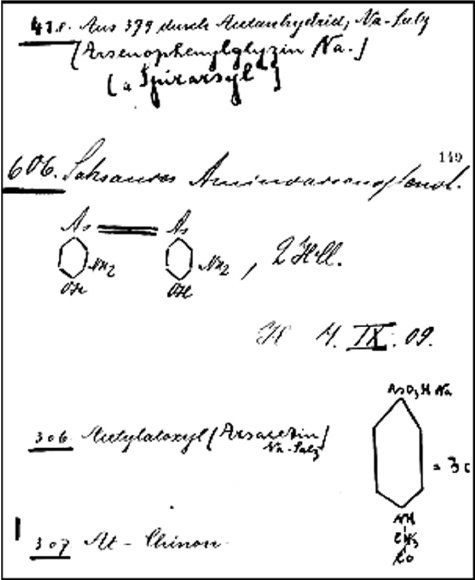 The first person to suggest that arsphenamine might have potential as a treatment for syphilis was Erich Hoffmann. Back in 1905 he and Fritz Schaudinn discovered that the disease was caused by Treponema pallidum, a spiral-shaped bacterium (spirochetes). Based on his observation of the similarity between spirochetes and trypanosomes, Hoffmann encouraged Ehrlich to investigate arsphenamine for syphilis, a disease for which there was a crying need for improved treatments.. 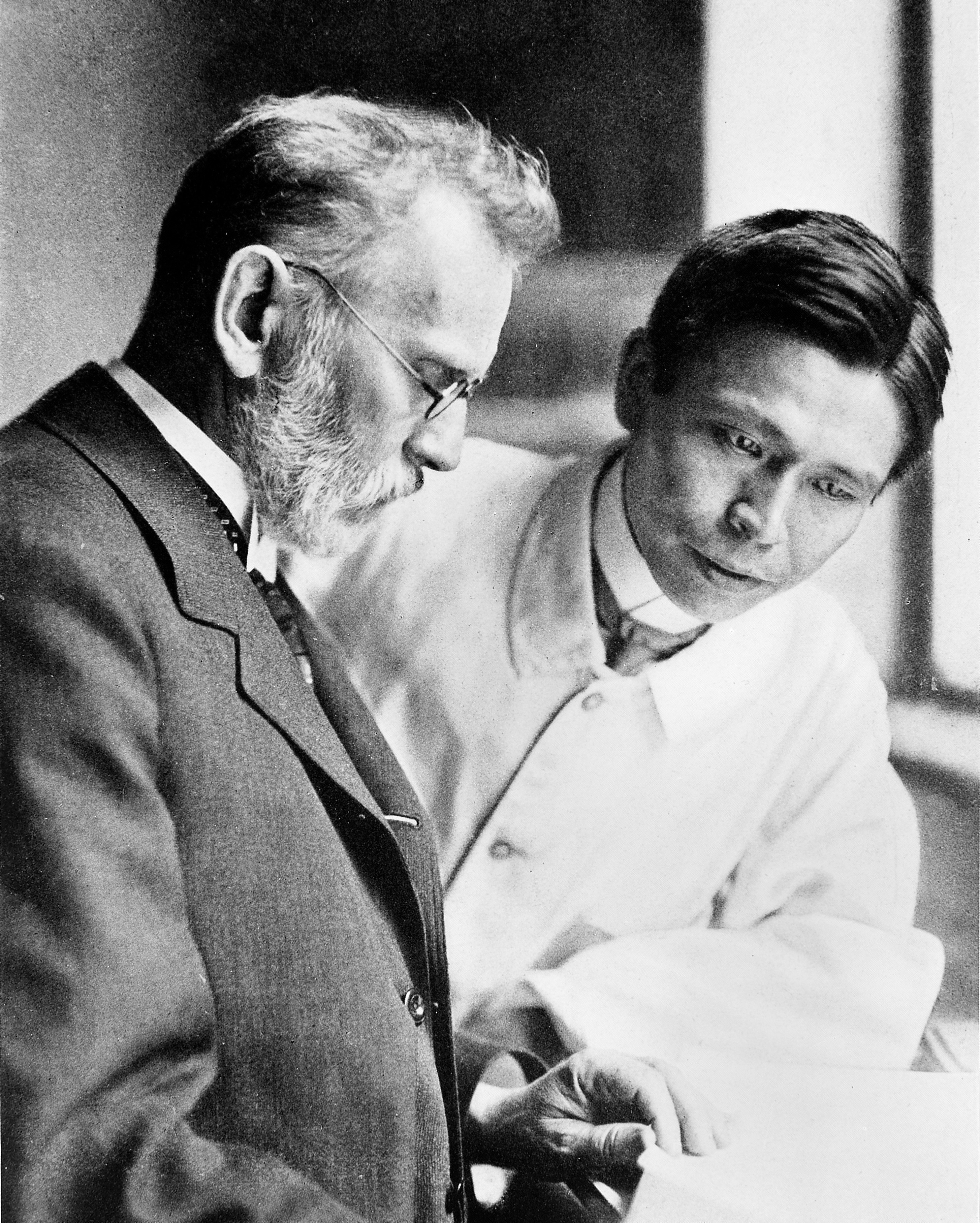 Tests carried out by two of Ehrlich's assistants initially suggested the new arsenical compound was useless against Treponema pallidum. The drug's prospects, however, changed following Ehrlich's recruitment of Sahachiro Hata, a Japanese bacteriologist who was an expert in producing syphilis infections in laboratory rabbits. On August 31 1909 Hata injected some arsphenamine into a rabbit with syphilitic ulcers (chancres). Encouragingly Hata found no live bacteria in the animal the next day and the chancras had completely disappeared after three weeks. Hata recorded similarly promising results in further tests with the drug in mice, guinea pigs and many more rabbits. Thereafter, Ehrlich's laboratory sent some samples of the drug to be tested in patients with primary syphilis at Magdeburg Hospital and elsewhere. On 19 April 1910 Ehrlich and Hata announced to the Congress for Internal Medicine at Wiesbaden that the compound had proven successful in the syphilitic patients. Thereafter, Ehrlich's laboratory was flooded with requests for the drug. This demand was met by Hoechst AG, a German chemicals company based in Frankfurt, with which Ehrlich had long-standing commercial and professional contracts. By the last quarter of 1910 the company had supplied 60,000 free samples for further clinical testing in 10,000 patients (Bosch, Rosich;Leggett; Williams, 2005).

Hoechst AG, released the drug, rebranded Salvarsan, on to the market at the end of November 1910. By then the company was making almost 400,000 ampoules of the drug. Clamour for the drug was so high that by 1911 Salvarsan comprised approximately an eighth of Hoechst's large pharmaceutical turnover. Salvarsan soon became Hoechst's and the world's best selling drug. Revenue from the drug trebled from £50,000 in the first year to £150,000 in 1911 (Williams, 2005). 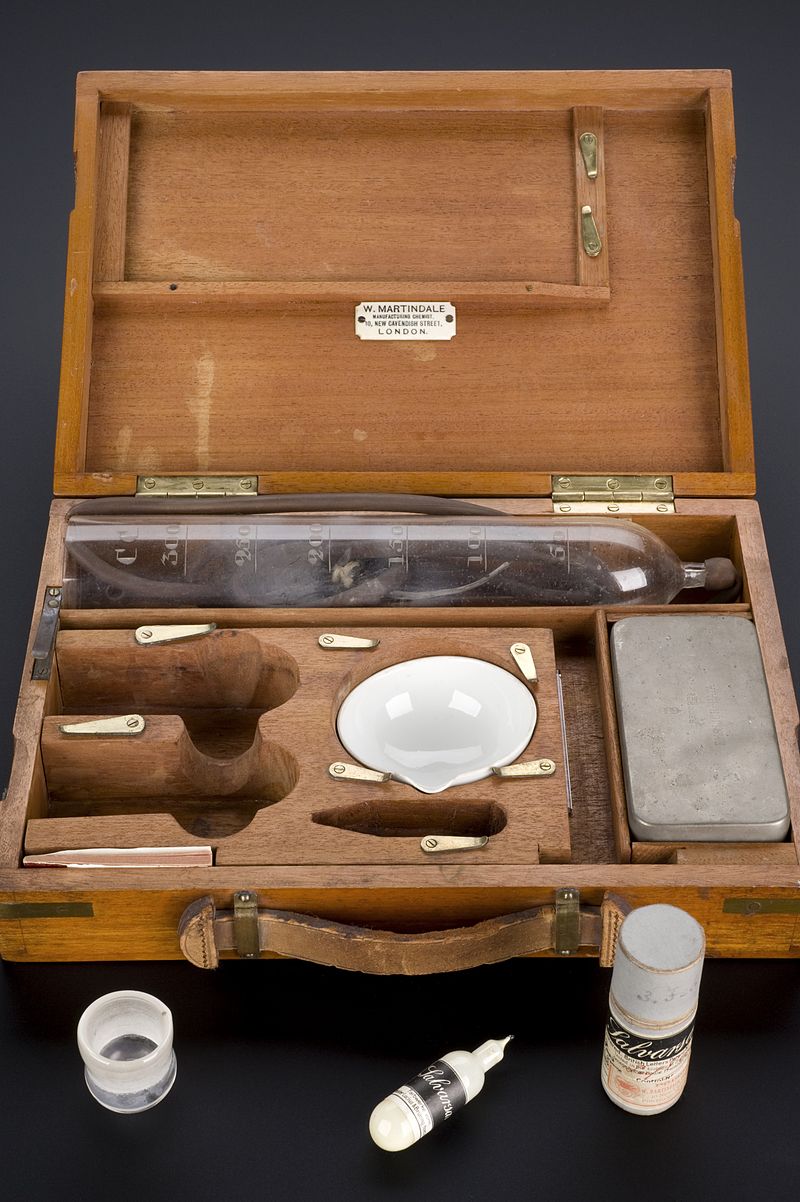 Figure 3.1.4: Salvarsan treatment kit for syphilis, Germany, 1909-12. (Credit: Wellcome Images) Salvarsan and other arsenicals were administered to patients via intravenous infusions. This was a painful procedure and needed to be done over a prolonged period for it to prevent the development of disease resistance or recurrence. Overall treatment lasted at least 18 months, during which time a patient received 20 arsphenamine injections and 30–40 mercury or bismuth injections (Bosch, Rosich).

Despite its success, Salvarsan treatment was difficult and painful to inject and did not cure syphilis overnight. In addition, the actual synthesis of the drug was complex and any impurities that managed to get into the final product were highly toxic to patients. For this reason Ehrlich took efforts to improve the compound. By 1912 he had developed a new compound, neoarsphenamine. Branded NeoSalvarsan, this drug was easier to manufacture and less toxic than Salvarsan because it contained only 19 percent of arsenic. Nonetheless, NeoSalvarsan was still liable to cause symptoms like nausea and vomiting. Such problems, however, did not prevent its use. Indeed, despite their unpleasant side-effects, both Salvarsan and NeoSalvarsan remained the standard treatment for syphilis until the 1940s when antibiotics, like penicillin, appeared.

Bosch F, Rosich L (2008) ‘The Contributions of Paul Ehrlich to Pharmacology: A Tribute on the Occasion of the Centenary of His Nobel Prize’, Pharmacology, 82: 171–79.Back

<< The mounting evidence of resistance to drugs