What is antimicrobial resistance and how big is the problem?

'AMR' is the umbrella term used to describe the diverse range of mechanisms that microbes, like bacteria, fungi, viruses and other parasites, use to survive the destructive effects of drugs, such as antibiotics, antivirals, antifungals and antimalarials). Such microbes are often called 'superbugs'. Resistant bacteria are the most prevalent form of AMR.

AMR is a natural process that is fundamental to the survival and evolution of microbes which is accentuated by the misuse and overuse of antimicrobial agents. Poor sanitation and animal husbandry, the use of antibiotics to promote growth in farm animals and as prophylactic treatment, inadequate infection control and inappropriate food handling are also major contributors. Other important drivers of AMR are the supply of poor-quality antibiotics, the absence of adequate diagnostic tools and surveillance systems, insufficient community education and increasing population movement and travel (MSF). 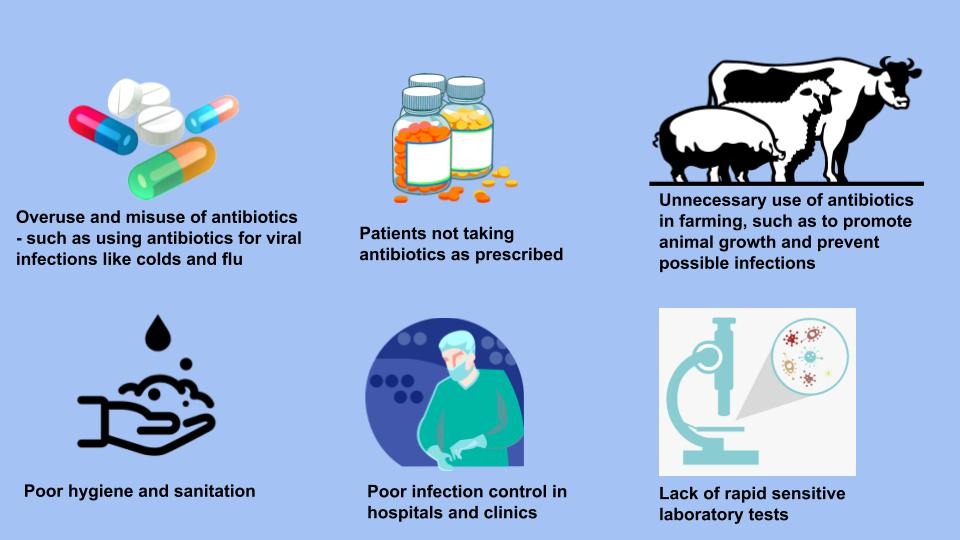 How big is the AMR problem?

In 2011 Dame Sally Davies, the Chief Medical Officer for England went so far as to warn that AMR was 'a ticking time bomb' and 'a threat that was arguably as important as climate change for the world' (Davies, 2011). A UK government report, issued in 2014, estimated that drug-resistant infections caused around 700,000 deaths each year worldwide and that this would climb to 10 million by 2050 if the current AMR trend continued. As can be seen in figure 1.3 (below) the number of deaths from AMR could far outstrip the number of people presently dying from cancer by 2050 (O'Neill). 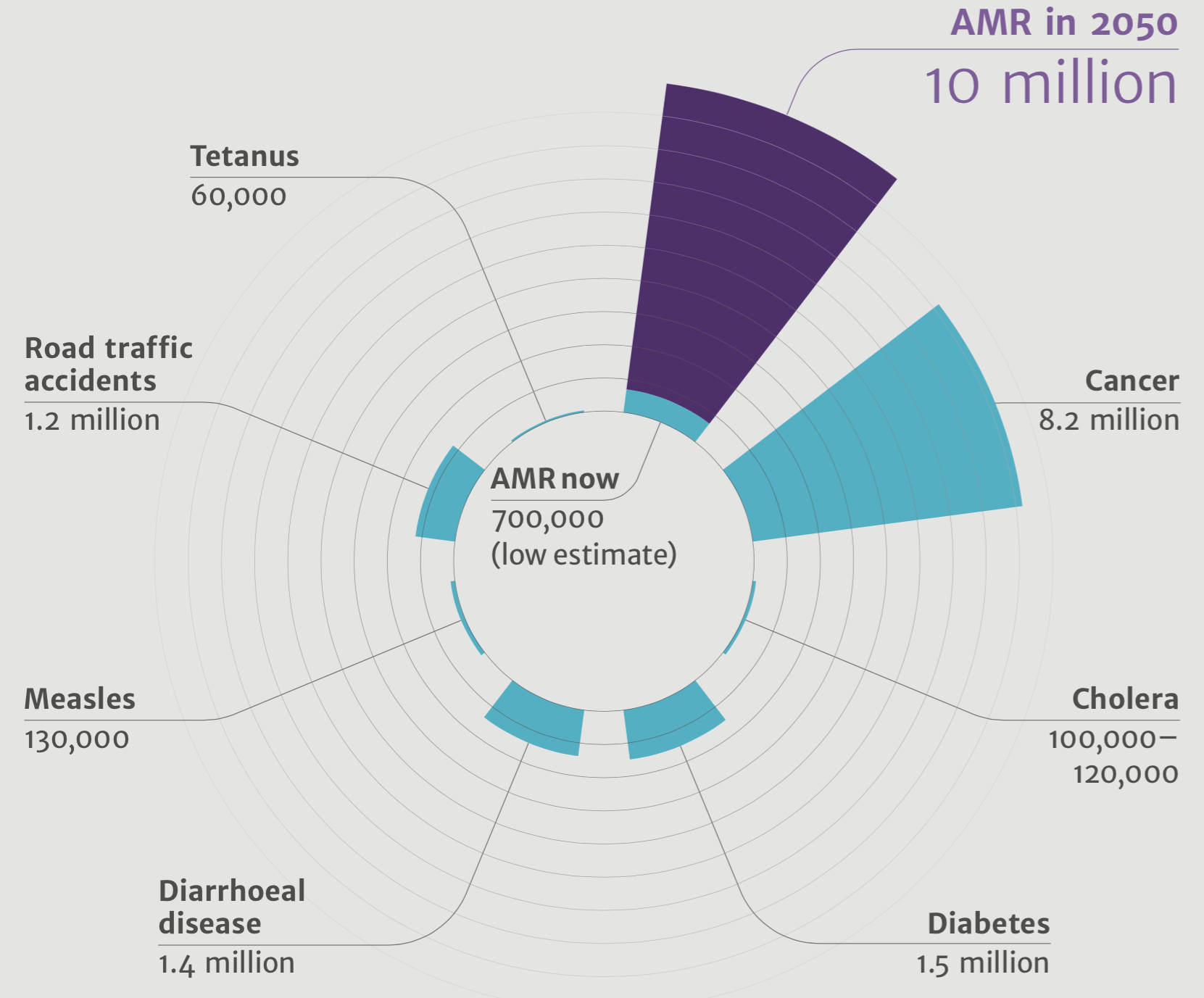 One of the most disturbing aspects of AMR today is that many common infections and minor injuries, like a simple paper cut to the finger or a scratch, could become untreatable. Some of the most common, and potentially fatal, bacterial infections are now proving resistant to multiple drugs. This includes tuberculosis and gonorrhoea, two highly infectious diseases once considered conquered but now making a major comeback. In 2016 WHO calculated that 490,000 people had developed multi-drug resistant tuberculosis globally. Other common illnesses growing resistant to antibiotics are pneumonia, urinary tract infections and enteric (gastrointestinal) diseases like typhoid. AMR is also starting to complicate the fight against HIV and malaria (WHO 2018).

So severe is the threat of AMR, that many medical professionals fear it could soon wipe out the success of medical procedures like organ transplantation, cancer chemotherapy, diabetes management, IVF, and major surgical operations like caesarean sections and hip replacements (WHO 2018).

Where the burden of AMR could fall most acutely in 2050 is in African and Asian countries (figure 1.4). Given the lack of healthcare provision and high prevalence of HIV, malaria and tuberculosis in such countries, this prediction is particularly troubling. Added to this, these countries are now having to deal with heavy disruption to their health services due to COVID-19. Critically, lock downs have resulted in the unavoidable reduction of routine childhood vaccination, which both the UN and WHO fear could unleash a resurgence of preventable infectious diseases, like diphtheria, measles and polio, in children and adolescents once societies reopen. It has also interrupted the diagnosis and delivery of monitored treatments for diseases like tuberculosis, which are essential to controlling their spread and minimising the development of drug resistance (WHO 2020).

Even in areas with moderately good healthcare provision the rise in AMR poses a major challenge. This is because anyone with a resistant infection requires many more tests, more expensive drugs, lengthier hospital stays and more intensive care than those with non-resistant infections. They are also much more likely to have a poorer clinical outcome and die. Add to this the fact that large numbers of patients are now having to be hospitalised because of COVID-19. Given that hospitals are an ideal environment for multidrug-resistant organisms to spread, this is inadvertently leading to an increase in antibiotic use. Together with the widespread use of biological agents for personal and environmental disinfection, this has set up the perfect conditions for accelerating AMR (Perry). 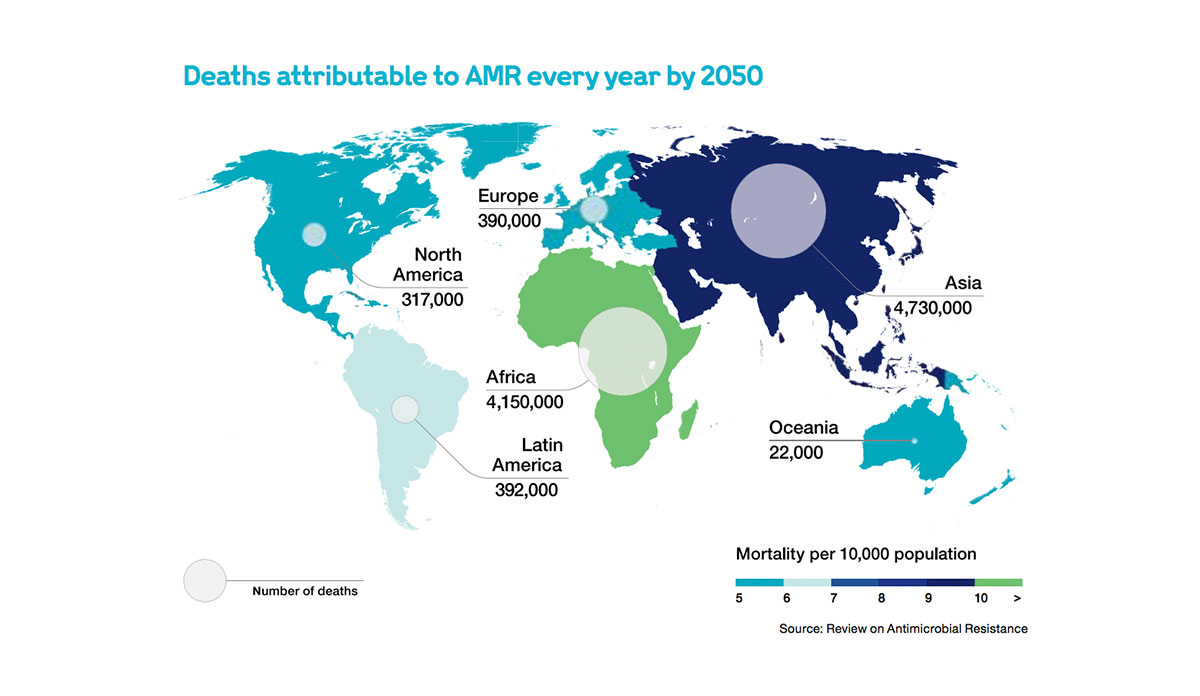 Declining number of new antibiotics add to the problem

Adding to the concern about AMR is the decline in the number of new antibiotics coming to market. As figure 1.3 shows the number of new antibiotics developed and approved has steadily decreased over the past three decades. One of the major challenges is getting companies to invest in the development of new antibiotics to treat highly resistant bacterial infections because only a small number of patients contract such infections. Such development also involves a great deal of effort, scientific research and expense upfront with no guarantee the drug will get approval. Only 1 out of 5 drugs developed for infectious diseases gained FDA approval in recent years. Today there are 41 new antibiotics in different stages of development. The bulk of this development is being done by small companies, rather than large pharmaceutical companies that used to dominate the market (Kim). 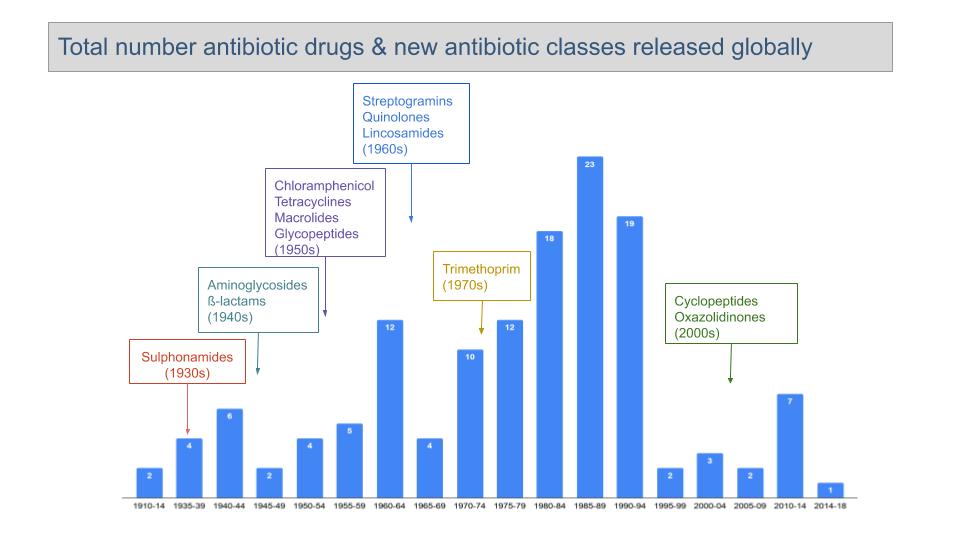 Figure 1.5: Number of new antimicrobial drugs released on to the market (Credit: Wikipedia: Timeline of Antibiotics).

O'Neill, J (Dec 2014) 'Resistance: Tackling a crisis for the health and wealth of nations', UK Government.Back

Perry, R (11 April 2020) 'Coronavirus pandemic is paving the way for an increase in superbugs', The Conversation.Back