One of the first people to voice concern about AMR was Alexander Fleming. As early as 1936, eight years after he discovered the antibacterial qualities of penicillin, Fleming alerted medical students to the dangers of overusing the substance because it would encourage the bacteria to develop resistance (Wighton). Only a handful of patients had in fact received penicillin when he issued this warning. It was also unclear whether the compound could ever become a viable drug. Click here for the history of penicillin. 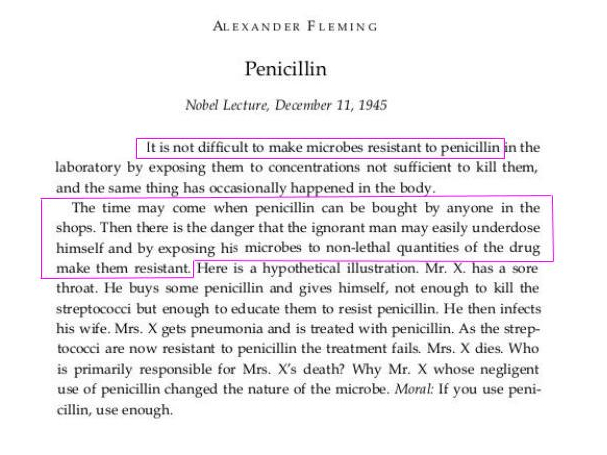 Figure 2.1: Extract from Fleming's Nobel Lecture. This excerpt from Fleming's Nobel Prize lecture highlights his warnings about the mass distribution of penicillin and patients not understanding the dangers of under dosing. Just how important it was to ensure patients took sufficient doses of penicillin was underlined by the case of Albert Alexander, the first patient to receive purified penicillin. While Alexander made a remarkable recovery after receiving the first infusion of the drug, given on 12 Feb 1941, his infection returned after the drug ran out, leading him to die.

Fleming reiterated the dangers of resistance with penicillin again in December 1945. This time he did it more publicly, when he received the Nobel Prize. By then the drug had saved the lives of thousands of soldiers in World War II and was being produced on a large-scale. Penicillin production in the United States, for example, increased sharply from 21 billion units in 1943 to more than 6.8 trillion units in 1945. What most concerned Fleming was how easily accessible the drug had become. Penicillin had in fact become available over the counter in all US pharmacies in March 1945 (American Chemical Society). For Fleming, the major danger lay in patients not taking sufficient doses of the drugs. As he pointed out, such under dosing would encourage the rise of bacterial resistance.

Fleming was not the only one to sound a note of caution. So too did René Dubos, a French-born American microbiologist who, in September 1939, electrified the world with the announcement that he had purified enough of a particular antibacterial agent (gramicidin) to protect five trillion mice against pneumococcal and streptococcal infections. One of the novelties of Dubos' work was that he had managed to produce the compound on the back of a systematic approach he devised to discover new antimicrobial reagents. This was very different from Fleming who discovered penicillin by chance. Dubos' method involved feeding certain bacteria particles to soil samples to encourage the growth of specific microbes that thrived on such a diet and then extracting their enzymes. So revolutionary was Dubos' technique that on 9 September 1939 The New York Times proclaimed him to have opened 'up a vast new field in the search for chemical agents for fighting bacterial enemies'. Click here for more information about René Dubos.

What is striking about Dubos is how fast he shifted from being the figurehead of a new era in antibiotic development, to spearheading the campaign to curb the use of such drugs. Dubos first issued a warning about AMR in July 1942. This he did in a review of several antibacterial substances that had been recently chemically synthesised or prepared from microbial, plant and animal cells (Dubos, 1942). He had undertaken the survey just as two new antibacterial substances were making their way from the laboratory bench into the first clinical trials. The first drug was penicillin and the second was gramicidin, the drug that emerged from Dubos' work.

One of the key points that Dubos made in his review was that bacteria would always adapt to new antibacterial agents and produce resistant strains. He made the same observation again two years later, stating 'bacteria and probably all micro-organisms, exhibit an extraordinary plasticity and can undergo profound variations in their biological properties' (Dubos, 1944). Dubos came to this conclusion based on his two decades of research into the interplay between organisms and their environments, including in the soil, laboratory cultures and animal tissues. It was Dubos' knowledge of this process that underpinned his pioneering systematic method to find new antibacterial substances (Moberg).

Like Fleming, Dubos continued to point out the dangers of the excessive use of antibacterial drugs. He first aired this concern in 1943 in a series of lectures to both the general public and medical and scientific audiences (Moberg; Honigsbaum, 2017). Dubos reiterated this message again in his book The Bacterial Cell. Published in 1945, this book soon became a standard textbook in the bacteriology field. In addition to providing considerable evidence about AMR, Dubos' book stressed that such resistance was linked to more than one mechanism. Overall Dubos questioned the wisdom of looking to antibiotics as the panacea to treating bacterial diseases given the rapidity with which bacteria could adapt to new environments.

Figure 2.2: Extract from R Dubos, 'Microbiology', Annual Review Biochemistry, 11 (1942), 659-78, p.675. What is noteworthy in this extract from Dubos' article is his notion that bacteria can be 'trained' to become resistant to antibacterial agents and the fact that he does not mention bacteria genetics. His comments reflect the fact that up to the 1940s bacteria were assumed to be simple organisms and there were still questions as to whether they possessed genes and whether DNA was in fact genetic material. 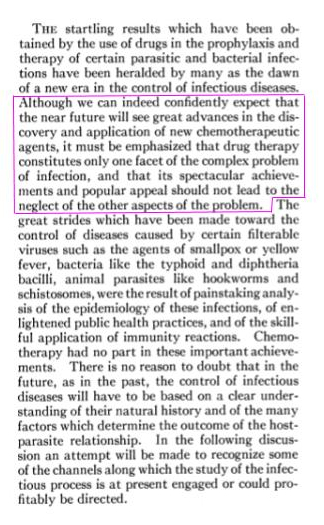 Figure 2.3: Extract from R Dubos, 'Trends in the study and control of infectious diseases', Proceedings of the American Philosophical Society, 88/3 (Sept 1944), 208-23. What is most striking in the extract shown here is the extent to which Dubos highlights the danger of relying solely on drugs to control infectious diseases and the importance of continuing to investigate the natural history of microbes and the host-parasite relationships. In the same article Dubos stressed the need for all laboratories 'throughout the land … to maintain a permanent survey in order to follow the shift in susceptibility of the different agents to the drugs in common use.' Such comments are especially noticeable because Dubos' article was published well before penicillin became available to civilians.

The warnings issued by Fleming and Dubos in the early 1940s went largely unheeded in the excitement generated by penicillin and the subsequent headlong rush to find other antimicrobial drugs. Most scientists and clinicians assumed that it would be possible to counter the rise of resistant pathogens through the discovery and development of new antibiotics. Such optimism was fuelled by the large number of antibiotics that began to appear on the market in the decade after the Second World War (Davies, 2006).

Dubos, however, persisted with his message. In 1959 he issued another scathing rebuke against the overuse of antimicrobial drugs, warning 'at some unpredictable time and in some unforeseeable manner nature will strike back'. This he did in his book The Mirage of Health. Dubos compared the faith in antibiotics in his book to 'the native cowboy philosophy that permeates the Wild West thriller', and made the point that complete freedom from disease was 'almost incompatible with the process of living' (Honigsbaum). Dubos was particularly critical of antibiotic use to prevent disease, which he argued came at 'the cost of a huge ransom' (Moberg). From his perspective the medical profession was making a grave mistake to believe infectious diseases could be conquered by drugs because the evolution of resistance had no limit. For this reason he recommended antibiotics only be used in acute crises (Dubos, 1959).

Fleming and Dubos' warnings about AMR were just the first of many more to come. The warnings took many forms over the years. Initially the problem was optimistically perceived to be one that could be limited by the judicious use of antibiotics by doctors and patients alongside the pharmaceutical industry continuing to develop new antibiotics. This was an attitude that prevailed mostly in the years between 1945 and 1963. Concerns, however, became more pessimistic from the 1960s following the discovery that plasmids could transmit AMR across species. Plasmids are small circular DNA strands that are found in the cytoplasm of a bacterium or protozoan and have the ability to replicate independently. Fears about AMR took on yet another new twist following the outbreak of the AIDS epidemic in 1981 and the sharp decline in the number of antibiotics making it to market. From then on AMR was conceived as a shared global threat that required collective action and preservation of antibiotics as a precious resource. By the early 2010s AMR had become characterised as a major impending disaster and in strong need of coordinated measures by different agencies across the world (Podolsky).

Dubos, R (1944) ‘Trends in the study and control of infectious diseases’, Proceedings of the American Philosophical Society, 88/3: 208-23.Back

<< Introduction to AMR exhibition
The history of penicillin >>