Engineering and testing a safer compound 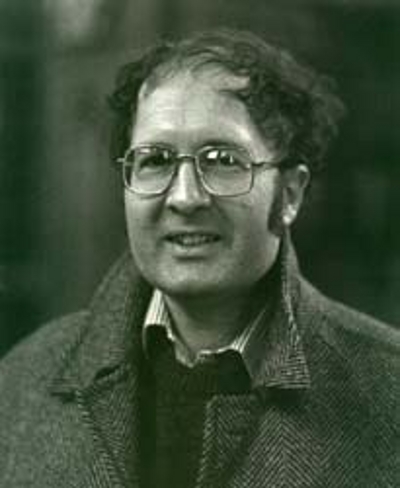 This is a photo of Gregory Winter, a protein chemist who in the late 1970s was a post-doctoral researcher at the MRC's Laboratory of Molecular Biology, Cambridge. Credit: Gregory Winter, Trinity College Science Society.

In 1986 Gregory Winter, together with the help of colleagues at the Laboratory of Molecular Biology and encouragement from César Milstein, demonstrated the feasibility of building a new type of monoclonal antibody. It marked a breakthrough in the engineering of monoclonal antibodies, providing what would later be coined 'humanised' monoclonal antibodies. The technique rendered the monoclonal antibody more human-like, decreasing the mouse component of the molecule to just 5 per cent. Winter's method would be subsequently dubbed 'CDR grafting'. It was published for the first time in P.T. Jones, P. H. Dear, J. Foote, M. S. Neuberger and G. Winter, 'Replacing the complmentarity-determining regions in a human antibody with those from a mouse', Nature, 321/6069, (29 May 1986), 522-5. A patent application was submitted for the method in 1986.

What had underpinned Winter's efforts to humanise monoclonal antibodies was the belief that this might diminish the foreignness of such molecules in patients and thereby reduce their potential to trigger negative immune responses. It remained to be seen, however, whether the technique could be applied to the development of a monoclonal antibody of clinical importance.

Winter would not have to look far to test his new technique, because, just across the road, Waldmann's group was then wrestling to find a means to reduce some of the side effects they were witnessing in the patients they were treating with Campath-1G. Foreignness, and consequently potential immunogenicity, was thought to be contributing to the problem. Even before the evidence was available, they believed any hint of immunogenicity could prevent the commercial development of the antibody. To this end, they were investigating the immunogenic effects of different therapeutic antibodies in animals.

Much of the chimerisation work undertaken by Waldmann's team was conducted by the biochemist Michael Clark, Marianne Bruggemann, a geneticist and immunologist and Mark Frewin, a technician with the help of Michael Neuberger, one of the pioneers in the development of chimeric antibodies based at the LMB. They soon had to hand a panel of chimeric monoclonal antibodies and thereafter began to look into the possibility of turning Campath-1G into a chimeric Mab. On learning of the success of Winter's new humanising approach, they decided to switch tactics. Winter's technique was particularly attractive because it facilitated an even greater reduction of the rodent component in the monoclonal antibody than could be achieved with chimerisation, and therefore the possibility of creating an even safer drug.

In late 1986 Waldmann and his team began a collaboration with Winter and his post-doctoral fellow, Lutz Riechmann, a molecular biotlogist, to see if Winter's new technique could be used for the cloning, humanisation and expression of a recombinant form of the Campath-1G. This was not a simple process and involved painstaking work in several steps.

Click here to see the work plan for humanisation. 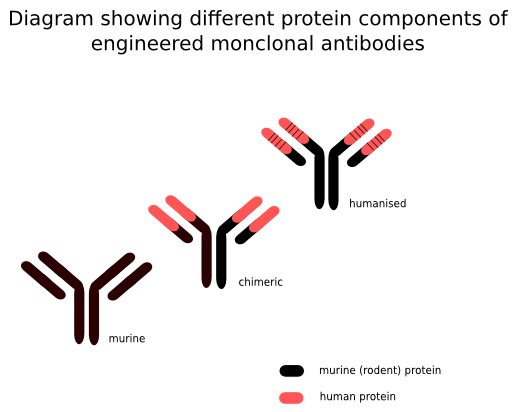 The team finally achieved a humanised version of Campath-1G in 1988. Commenting on the achievement, Winter recalls, 'I look back and I just don't know how we did it.' The work had not been easy. It had involved taking particular regions of a human antibody and inserting these into a rat antibody. The resulting compound was called Campath-1H, the first humanised rat antibody with therapeutic potential. News of the successful humanisation of Campath-1G was published in L. Riechmann, M. Clark, H. Waldmann, G. Winter, 'Reshaping human antibodies for therapy', Nature, 332/6162 (24 March 1988), 323-7. The work formed the basis of a patent application submitted to the British patent office on 2 Dec 1988 (H. Waldmann, M. R. Clark, G. P Winter and L. Riechmann, 'Altered antibodies and their preparation', Application 880228).

In 1988, a few months after Campath-1H had been developed, Waldmann and his team were ready to start testing it on humans. This they did after gaining approval from the ethics committee at Addenbrooke's Hospital and signed consent from patients.

The first patient chosen for testing was a woman, aged 69, suffering from non-Hodgkin's lymphoma who had been receiving treatment from Martin Dyer and Frank Hayhoe in the Haematology Department at Addenbrooke's Hospital since 1983. She had been given various oral and intravenous chemotherapeutic agents as well as radiotherapy, including Campath-1G in 1987. At the time she received Campath-1G she not only had a very high white cell count, but her bone marrow was completely packed with tumour cells and her spleen badly enlarged. Promisingly Campath-1G had helped reduce some of her lymphoma cells. It had to be abandoned, however, after 8 days, because it had caused her to develop a fever, nausea, vomiting and severe bronchospasm.

While Campath-1G had helped slow down the growth of woman's lymphoma cells, by March 1988 she had began to lose weight and experience drenching night sweats. In addition, her spleen was substantially expanding and the lymphoma cells in her blood were multiplying. With little other treatment to offer, Dyer and Hayhoe, together with Waldmann and his team, decided to try Campath-1H based on the fact that experiments in test-tubes had shown the woman's tumour cells to be sensitive to the antibody. Possessing only a small of amount of Campath-1H at this stage, initially 1mg of the drug was given daily. Once proven tolerant of the drug, the woman was thereafter given 20mg per day. In all she received 126mg of Campath-1H over 30 days.

Encouragingly, the woman suffered no suffered no ill-effects from Campath-1H and tolerated it well. Furthermore, Campath-1H quickly helped improve her condition. Within 6 days of treatment she was no longer having night sweats. By day 10 the woman's spleen had begun to shrunk and by day 18 the lymphoma cells had cleared from her blood.

Click here to see data collected from the first patient treated with Campath-1H. 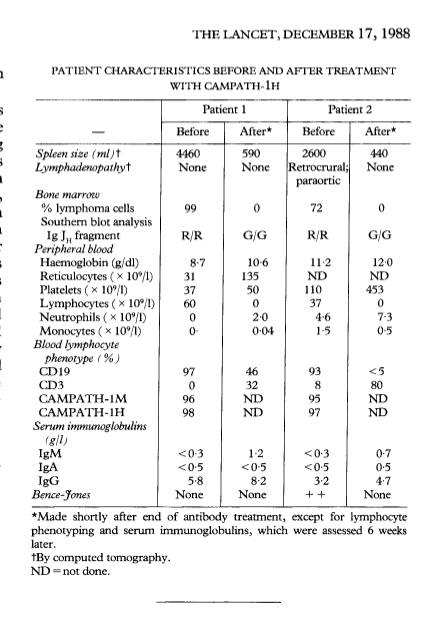 Soon after the woman received Campath-1H, Winter visited her. He recalled, 'She was a lovely old lady and she said to me “you must be very pleased about this,” and I said, “well, yes I am, but I am also extremely worried.”' On being questioned by her as to why he was worried, Winter replied it was because he had no idea whether her remission would be short or longer-term. Winter remembers emotionally choking to hear her respond, 'Oh, it doesn't matter dear. If it buys me a few months that will be fine. My husband is dying and I want to be with him when he dies.'

While Campath-1H dramatically improved the woman's health, three months later she experienced a relapse due to a retained reservoir of tumour cells in her spleen. This prompted a second course of Campath-1H and the surgical removal of her spleen, a procedure not possible prior to treatment due to her enlarged spleen. Campath-1H had reduced the weight of her spleen from 4.5kg to 0.6kg. Despite regaining better health, the patient experienced another relapse and died 15 months later.

The second person selected for Campath-1H treatment was Ken Sander, a retired professor from the Department of Engineering, Cambridge University. Aged 67 he had been newly diagnosed with non-Hodgkin's lymphoma. Like the woman treated before him, Ken had an enlarged spleen and a high number of lymphoma cells in his bone marrow. He also had enlarged lymph nodes and a high white cell count.

With Campath-1H treatment, Ken experienced a complete remission, including regression of his lymph nodes and a reduction in the size of his spleen. A few months later some residual disease was detected, so he was treated with conventional chemotherapy. Ken would continue to live for many years after completing his treatment with Campath-1H.

While Campath-1H resulted in a marked improvement in the first two patients treated, a much larger number of patients needed to be tested before its effect on non-Hodgkin's lymphoma and associated lymphocytic leukaemia could be fully determined. This testing would be continued by Wellcome Biotech after it gained a license to Campath-1H. The company did this alongside establishing trials to test the effectiveness of the drug in preventing organ transplant rejection and treating rheumatoid arthritis.