Much of early clinical testing of alemtuzumab was done with grants secured from government agencies. Most of the supplies of the drug were generated in-house. This involved first growing hybridomas in the peritoneal cavity of rats which secreted monoclonal antibodies into the rat's abdominal fluid, known as ascites. Soon this crude method was replaced by growing hybridoma cells in tissue culture in flasks.

Production was a time-consuming and fiddly process. Jenny Phillips, who was the chief technician involved in the drug's production, recalls that in general hybridomas produced only about two and a half micrograms of monoclonal antibodies per millilitre of medium, so production involved litres and litres of medium and cells in flasks. All the medium had to be made from scratch. On average, 200 litres of culture medium had to be made up each week. 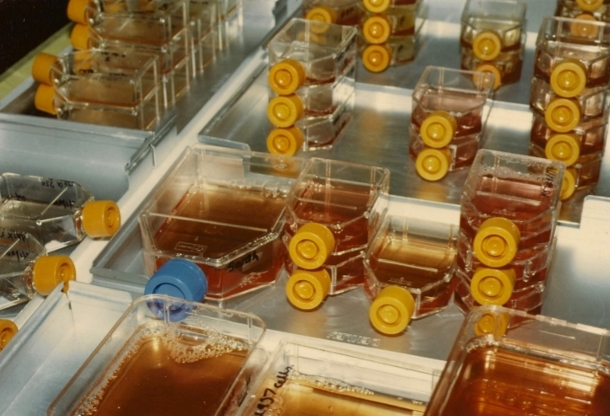 A little flask of seed cells would take about a week to grow to fill up a roller bottle full and another two to three weeks to fill ten roller bottles. Medium would be added to these bottles to promote the growth of the cells on a regular basis and some of the liquid poured off from the bottles for checking so as to determine the quantity of monoclonal antibodies produced. Each bottle contained 1 litre of liquid, of which three-quarters would be regularly decanted so as to allow for expansion of the cell line. It was easier to seed the next batch for production if some monoclonal antibody cells were left stuck to the side of the roller bottles during the pouring process. Checking, feeding and pouring had to done repeatedly until eventually 20 to 30 litres of the mixture were collected.

In 1987, some of the time-consuming and laborious process of producing alemtuzumab in roller bottles was eased with the purchase of a fermentor. The advantage of the machine was that it cut down on many of the manual tasks involved in production. It not only facilitated the feeding of medium into the culture on a regular basis, but also provided a steady supply of oxygen that was necessary for growing the cells. Filtration of the monoclonal antibodies was also made easier because the fermentor contained a bioreactor similar to kidney dialysis cartridges. The fermentor could operate for up to six months with little attention, providing a supply of monoclonal antibodies at a higher concentration, 20 times greater than anything achieved before. It also allowed for greater sterility in production. Not only was the unit itself sterile, it cut out the necessity of pouring liquid from one container to another, thereby decreasing the risk of contamination. Click here to see the roller bottles and fermentors used for the production of Campath.

While the fermentor made production easier, it did not completely eliminate all the problems involved in production. One of the key difficulties was the fact that production relied on the use of live organisms. In spite of perfectly controlled conditions, pressure, temperature and humidity such organisms could behave unpredictably. Each fermentor was rigged up to a computer connected to a phone that would ring the TAC staff at home should anything go wrong. On more than one occasion this happened in the middle of the night. The person woken would have to come in to sort out the problem. Not surprisingly, it was not a popular job.

By the late 1980s, Waldmann's team had produced 56 batches of different forms of Campath in the laboratory. This, however, was insufficient to meet the clinical demand for Campath, which by now was not only being tested for BMTs, but also for other conditions, such as leukaemia, lymphoma and autoimmune diseases like rheumatoid arthritis. As the demand increased, so the pressure mounted to move production out of the original research laboratory in the Department of Pathology and into new premises with extra space and staff.

In September 1990, after three years of planning, the Cambridge group opened what was to be called the Therapeutic Antibody Centre (TAC). The Centre was facilitated by £1.4 million from the MRC and the Wellcome Foundation. The MRC also paid £400,000 to cover the capital cost of setting up TAC and was to provide £200,000 annually to cover the running costs over 5 years. Additional funds were secured from the Kay Kendall Trust, which helped cover the costs for the production of antibodies for the treatment of leukaemia. The remaining costs were to be covered by money from Wellcome Biotech, which was beginning to commercialise alemtuzumab. Cambridge University also allocated funds to the Centre. In this way, no single group had exclusive rights to the TAC's resulting products. Click here to see a cutting from the Cambridge Evening News announcing the TAC's official opening, September 14 1990.

The TAC was based in the Regional Transfusion Centre at Addenbrooke's Hospital. One of the advantages of locating the TAC in the Transfusion Centre was not only the fact that it was next door to Waldmann's laboratory, but it also had in place the necessary sterile conditions and technical expertise in good manufacturing practice which it had established some years before to facilitate the making of blood reagents. 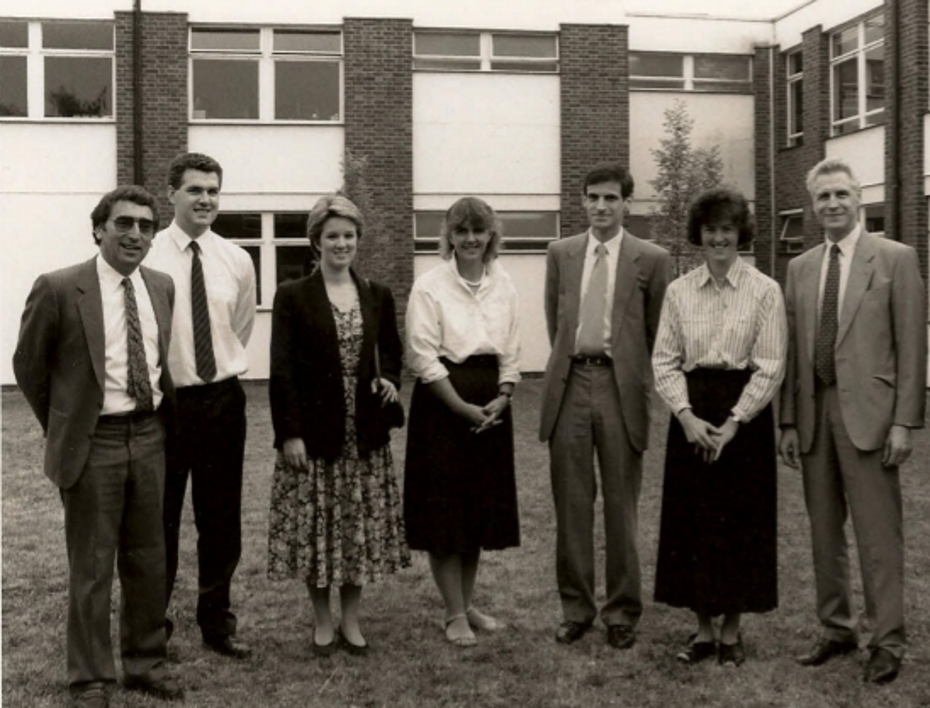 The objective of the TAC was to provide a comprehensive facility for the manufacture of monoclonal antibodies, including alemtuzumab, for use in pilot trials and as treatments that had profound and lasting benefit to patients in the short term. The latter treatments were of little interest to pharmaceutical companies, because they promised less commercial reward than long-term palliative care they prioritised. The TAC was not intended for the routine production of drugs necessary in large-scale trials which Waldmann and his colleagues regarded as the preserve of the pharmaceutical industry.

This is a photo of a cake baked by Jenny Phillips to commemorate the official opening of the TAC. The cake has on its top little models of the fermentors operated by technicians wearing hats and protective clothing used to maintain the high levels of sterility needed for the production of monoclonal antibodies. Credit: Geoff Hale.

By November 1990, 6 members of staff were working at the TAC. All the staff were trained in good manufacturing practice procedures. Training entailed attending courses and seminars and visiting established companies with experience in setting up and maintaining clean room supplies as well as antibody production. Click here to see the first progress report from the TAC.

One of the most difficult issues that the TAC team confronted in producing monoclonal antibodies was ensuring sterile preparation of large batches (200 litres) of culture medium. While large glass and rigid plastic vessels were easy to obtain, they were hard to wash and sterilise. The plastic containers could become contaminated with pyrogens and metabolic products of micro-organisms, both of which can cause fevers. Initially, the problem was resolved by using special plastic bags sourced from a soft drinks manufacturer. Commercial supplies of disposable bags became available later which were specifically designed for cell culture media. Click here to see some of the equipment used to produce monoclonal antibodies at the TAC.

Once grown in medium, the monoclonal antibodies needed to be purified. This could take between 2 and 3 weeks of work. It involved putting the collected medium in a continuous flow centrifuge to precipitate the liquid with ammonium sulphate and then purifying the mixture using column chromatography. Chromatography is a routine laboratory technique used to separate different mixtures into their different constituents. In the process of chromatography a target molecule becomes trapped on a solid or stationary medium. The medium is then removed from the mixture, washed and the target molecule then released from entrapment. Only half the quantity of monoclonal antibodies would remain once the purification process was complete. One batch of antibodies could treat between two and three patients.

Samples were taken from the batches prepared at different times and were regularly re-analysed for purity and activity. The monoclonal antibodies were checked for their biological activity and the final solution was scrutinised for its sterility and to ensure it was free from endotoxin, a poisonous substance produced by bacteria that can cause severe reactions in patients. Once made, the monoclonal antibodies were stored in sterilised vials and put in a -70C freezer where they would remain until needed for use in the clinic.

When the TAC was initially set up, its staff had little to go on in terms of guidelines for production and quality control. Unlike pharmaceutical companies, who were expected to conform to manufacturing guidelines laid down under the British Medicines Act of 1968, doctors and dentists conducting clinical trials among their own patients were exempt from such rules until 2004. In the absence of government oversight, the TAC team put in place their own guidelines. This was done by drawing on a protocol developed in 1985 by the Cancer Research Campaign to guard against poor monoclonal antibody production by researchers it funded. Later on the TAC team adopted the guidelines laid down by the European Community for the control of the manufacture of biological products. Click here to see the operating principles drawn up for the TAC.

One of the problems the TAC staff faced, was ensuring a high degree of aseptic conditions for dispensing. The volume being handled within the TAC was too much to dispense by hand and too little to justify using a pharmaceutical filling machine. It involved filling between 100 and 150 vials a month. No dedicated equipment was available for such work. Geoff Hale resolved the problem by adapting a small auto-sampler for the purpose.

Once filled, the vials were frozen and dispatched on dry ice to individual clinicians when required. Each lot distributed was accompanied by data sheets providing recommendations for storage and administration together with warnings about the drug's possible side effects. Vials were distributed to clinical colleagues performing BMTs and treating patients with other conditions at Addenbrooke's Hospital and around the world. Between 1991 and 1993 the amount of therapeutic antibodies the TAC produced rose from just over 57g to 106g. By 1993 the TAC had produced 234g of therapeutic antibodies, of which 142g had been distributed to clinicians. Between 1990 and 1995 more than 5,000 patients were treated in clinical trials with antibodies made by the TAC.

In 1994 Waldmann was appointed to the William Dunn School of Pathology, Oxford University and the TAC followed him to new premises where it became an integral part of the university. Historically, the TAC demonstrated how modest facilities afforded by an academic centre could produce multi-gram quantities of different monoclonal antibodies to a consistent quality suitable for use in early-phase clinical trials. This was achieved through the use of the hollow-fibre fermentors and disposable plastics in a standard clean room. The use of disposable biocontainers, tubing and other such equipment minimised the need for elaborate cleaning and changeover procedures. Special attention was also put in place to assure quality control through the hiring of trained staff and the separate development and production of the monoclonal antibodies. Click here to see photos of the new premises of the TAC in Oxford.