The start of a long journey

In 1973 Herman Waldmann, an immunologist and clinician, joined the Department of Pathology, Cambridge University, having just completed a doctorate on immune regulation. Soon after his arrival, Waldmann, under the mentorship of Alan Munro, launched research to understand how the immune system could choose between immunity and tolerance, the latter being the mechanism by which the immune system ignores the body's own cells and tissues while responding to and attacking foreign substances, or antigens, that threaten the body from outside, such as viruses, bacteria or pollen. He was particularly interested in testing the prevailing theory that immune tolerance signified a lack of co-operation between lymphocytes (white blood cells) in the immune system. 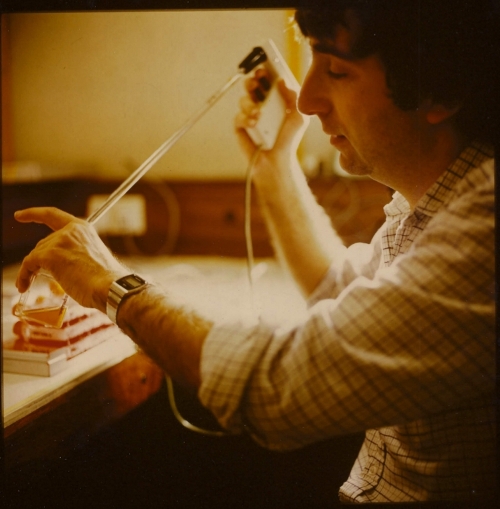 Taken in the 1970s, this is a photograph of Herman Waldmann working in his laboratory. Credit: Geoff Hale.

Over time, Waldmann began to wonder whether one way to assess the validity of the theory would be to conduct an animal experiment. The objective would be to reduce the number of lymphocytes in the animal and then expose it to a new antigen. Should immune tolerance be due to a lack of co-operation between lymphocytes, the animal would become tolerant to the antigen. Before he could start, however, Waldmann needed to find a means to eradicate the animal's lymphocytes. The tool he hit upon was monoclonal antibodies.

First generated in 1975 by Georges Köhler and César Milstein at the Laboratory of Molecular Biology (LMB) in Cambridge, monoclonal antibodies are produced from hybridomas (hybrid cells) created in the laboratory through the fusion of a myeloma cell with antibodies harvested from the spleen of an animal that has been immused against a particular antigen. Each hybridoma secretes antibodies that are identical (monoclonal) and have the power to locate and bind to specific antigens. Monoclonal antibodies are replicas of the billions of antibodies produced by our immune systems every day to combat foreign invaders.

Waldmann had been first alerted to monoclonal antibodies in 1974, when asked to teach Georges Köhler a plaque assay necessary for the experiments he and César Milstein were then mounting at the LMB, which would generate the first monoclonal antibodies. His interest was further piqued when invited to hear Milstein and Köhler discuss the results of their new technique at one of the LMB weekly meetings just before publishing it in Nature in early August 1975. One comment made during the meeting by Sydney Brenner proved particularly thought-provoking for Waldmann. Brenner asked whether it would now be possible to make monoclonal antibodies against anything, including, as he put it, 'against my mother-in-law'. 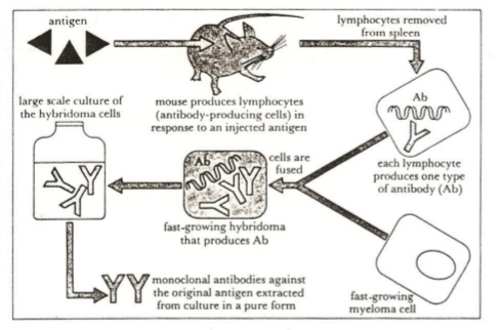 This is a diagram of the steps involved in the production of monoclonal antibodies. 1. It appeared in a leaflet produced by Geoff Hale in c.1989.

Having heard about the utility of monoclonal antibodies, Waldmann decided to take a sabbatical at the LMB, in 1978, to learn Milstein and Köhler's technique. By 1979 he had gained sufficient expertise to start generating his first monoclonal antibodies for targeting lymphocytes.

Waldmann's initial motive in creating a monoclonal antibody was to conduct animal experiments to investigate immune tolerance. He quickly realised, however, that such an antibody might also be clinically useful for bone marrow transplants (BMTs). Harvested from patients suffering from leukaemia prior to intensive radiation and chemotherapy, transplanted bone marrow provides a means to rejuvenate the bone marrow and blood supply damaged by such treatment.

BMTs are not risk free. As is the case for any tissue grafting, any incompatibility can mean a BMT will set off unwanted, and at times, severe immune reactions in recipients. This can result in a recipient's immune system attacking and rejecting the donated bone marrow as foreign. Improvements in matching techniques, which allowed for better screening of the immunological compatibility between donors and recipients, and the introduction of immunosuppressive drugs, such as methotrexate and cyclosporine, meant that by the 1970s the incidence of graft rejection among patients had greatly diminished.

Nonetheless, BMTs continued to pose a strong possibility of patients developing 'Graft-versus-Host Disease' (GVHD). First identified in 1959, GVHD is caused by the transplanted bone marrow (graft) attacking the recipient (host) body's organs and tissue cells which is regarded as foreign. Those experiencing the condition can suffer severe damage to their skin, liver and gut and have a high risk of chronic disability or even death. The incidence of GVHD remained so high during the 1970s that BMTs were not performed on a wide-scale.

By the early 1970s, scientists had demonstrated in animals that GVHD was caused by contamination of the bone marrow from mature T-lymphocyte cells. Based on this, various researchers around the world began investigating the possibility of purging T-cells from human marrow to improve BMTs. In 1980, a team of researchers, based at the Memorial Sloan-Kettering Cancer Center in New York, publicised some success in separating T-cells from human marrow using the plant lectin soy-bean agglutinin and sheep red blood cells. The technique however, was time-consuming, so its adoption was limited. 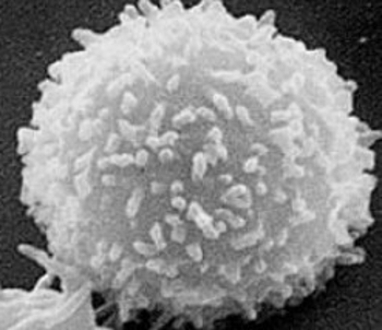 This is a photograph of mature T-lymphocyte cells (T-cells) as seen through an electron microscope. Credit: Wikimedia Commons.

Elsewhere researchers at Ortho-Diagnostic Systems, a subsidiary of Johnson & Johnson, also reported the successful development of a monoclonal antibody directed towards T-cells. Known as OKT3, this monoclonal was incubated with donor marrow ahead of transplantation, with the aim of coating the T-cells and thereby stimulating the recipient's immune system to remove and destroy them. While OKT3 had gone some way towards preventing GVHD, it did not completely eliminate the disease. Part of the problem stemmed from the fact that OKT3 did not work in tandem with cells made by the patient's immune system to effect the removal of the T-cells infused with the bone marrow. Although designed to seek out and bind to a particular target on the T-cell, OKT3 was not intended to function as a killer cell and could not activate the human immune system to destroy T-cells.

Early on Waldmann wondered whether a monoclonal antibody he created against lymphocytes could help prevent GVHD, thereby making BMT safer. What he hoped to develop was a monoclonal antibody that could simultaneously bind to T-cells and activate human complement, small proteins made by the immune system to help antibodies and phagocytic cells remove pathogens from the body.

Waldmann's goal of developing a functional monoclonal antibody with 'operational' specificity was highly novel. Most researchers at this time were focusing their energies on producing monoclonal antibodies against certain binding sites on cells to investigate antigens on their surface, rather than developing one with a particular function. Indeed, many of Waldmann's colleagues were highly sceptical he could generate a such a monoclonal antibody. To achieve his objective, Waldmann began exploring the possibility of developing an anti-T monoclonal antibody that would be capable of fixing human complement. Such an antibody, he theorised, would permit controlled lysis (dissolving) of the T-cells in a donor's bone marrow in a test tube, or in vitro, which could be done before infusing the marrow into a patient. 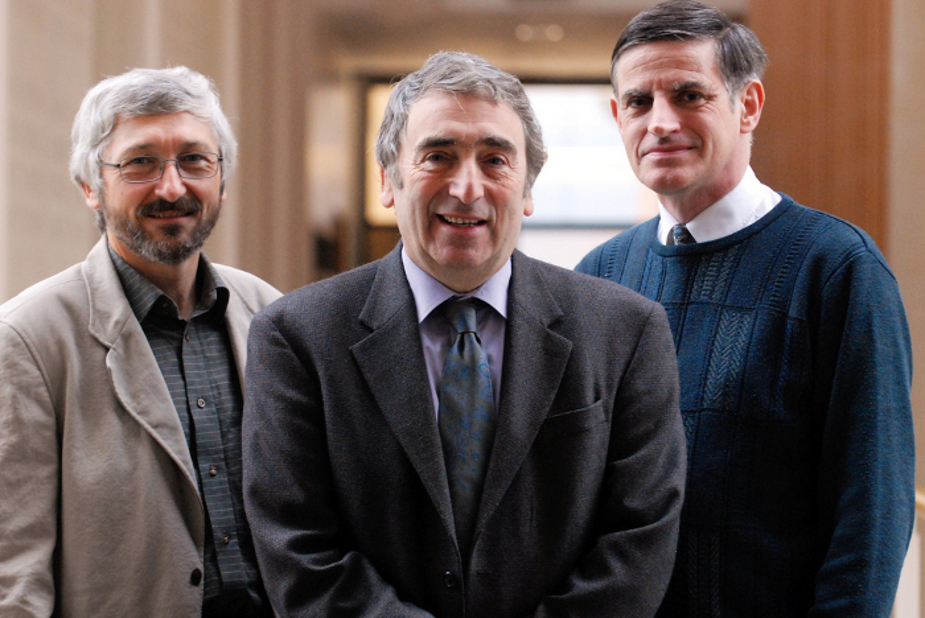 Waldmann can be seen here in the centre with two of his collaborators. To the left of Waldmann is Michael Clark and to his right is Geoff Hale. Credit: Cambridge Enterprise.

Supported by a programme grant from the Medical Research Council (MRC) 'Immunobiology of bone marrow transplantation', 1980, Waldmann was joined in his project by a number of other young researchers. Eager to join in on the cutting edge of immunological research, each of these individuals brought different expertise to the project. This included his doctoral student, Stephen Cobbold, a biochemist by training and Geoff Hale, a post-doctoral protein chemist. He was also helped by Alan Munro, his former doctoral supervisor, based in the Pathology Department. Also joining him were Don Metcalfe, who came to Cambridge on a sabbatical from Walter and Eliza Institute of Medical Research in Melbourne, and the post-doctoral cellular biologists Suzanne Watt and Hoang Trang. All three were experts in blood stem cells. Another important team member was Michael Clark, a biochemist who joined after completing a doctorate with Milstein.

Waldmann began working with his colleagues on the development of the first monoclonal antibodies in late 1979. They started the ball rolling by immunising a rat with a human lymphocyte. The rat's spleen cells were then fused with a rat myeloma cell line, known as Y3/Ag1.2.3, which had been recently developed by Giovanni Galfré and Bruce Wright at the LMB.

Waldmann's team not only generated Campath-1, but managed to create a number of other monoclonal antibodies. This included what would become known as CD3 antibody YTH12, sometimes referred to as Campath-3 and oteliximab. It too would be explored for its clinical applications, particularly for helping in the treatment of diabetes and other autoimmune diseases, but its development was paused later, when a late stage clinical trial for type 1 diabetes, using a low dose of the therapy, failed to meet its primary endpoints.

Experiments in animals proved the Campath-1 family of antibodies, particularly YTH66.9, to be especially good at activating complement and virtually eliminated T-cells. Importantly, it spared bone marrow stem cells. Results from the research were first published in 1983 in G. Hale et al, 'Removal of T cells from bone marrow for transplantation: a monoclonal antilymphocyte antibody that fixes human complement', Blood, 62, (1983), 873-82. 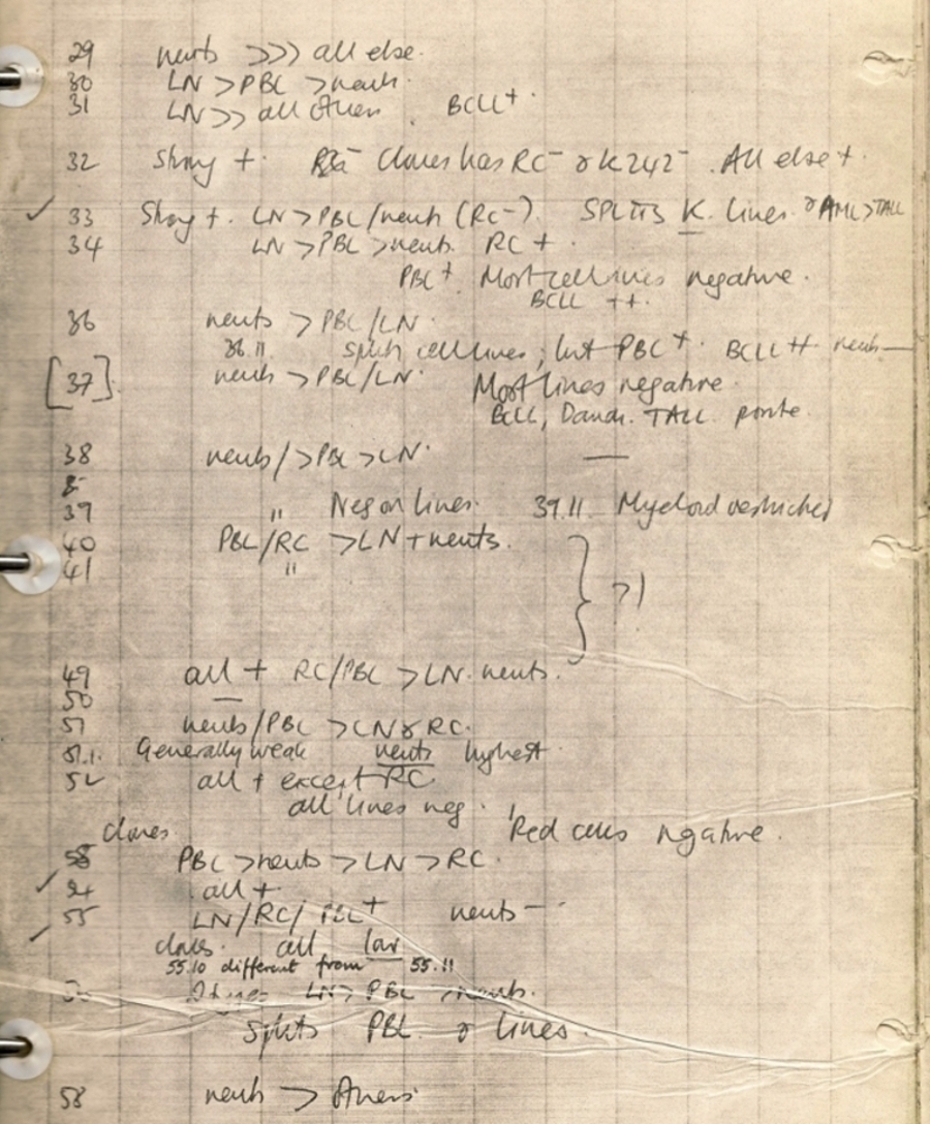 This lists the first results from the fusion of spleen cells taken from the immunised rat with those of the rat myeloma cell line. The numbers denote a range of wells containing different monoclonal antibodies. Number 34 contains Campath-1 monoclonal antibodies. The list appeared in a laboratory notebook, dated 1980. Credit: Geoff Hale.

One of the instruments used to test the effect of Campath-1M on Swirsky's blood was a flow cytometry cell sorter (FACS). The FACS instrument is a laser-based machine that enables scientists to count and sort cells using biomarkers. It works by suspending cells in a stream of fluid and passing them by an electron detection apparatus. The instrument had become a popular method by the 1970s for characterising and defining different cell types in a heterogeneous cell population, assessing the purity of sub-populations and analysing cell size and volume. Results from the test indicated Campath-1M powerfully targeted the T-cells in Swirsky's blood. Click to see more on the history of the FACS. 2. Click here to see data collected from the tests conducted with Campath-1M on Swirsky's blood.

By 1993, Waldmann and his team had determined Campath-1M bound specifically to an antigen labelled CD52. This antigen is an abundant molecule that is present on at least 95 per cent of all human peripheral blood lymphocytes, including T cells, NK cells and B cells. Importantly, the antigen is not found on human erythrocytes, platelets or bone marrow stem cells. This meant Campath-1M did not compromise normal process of blood cell formation. 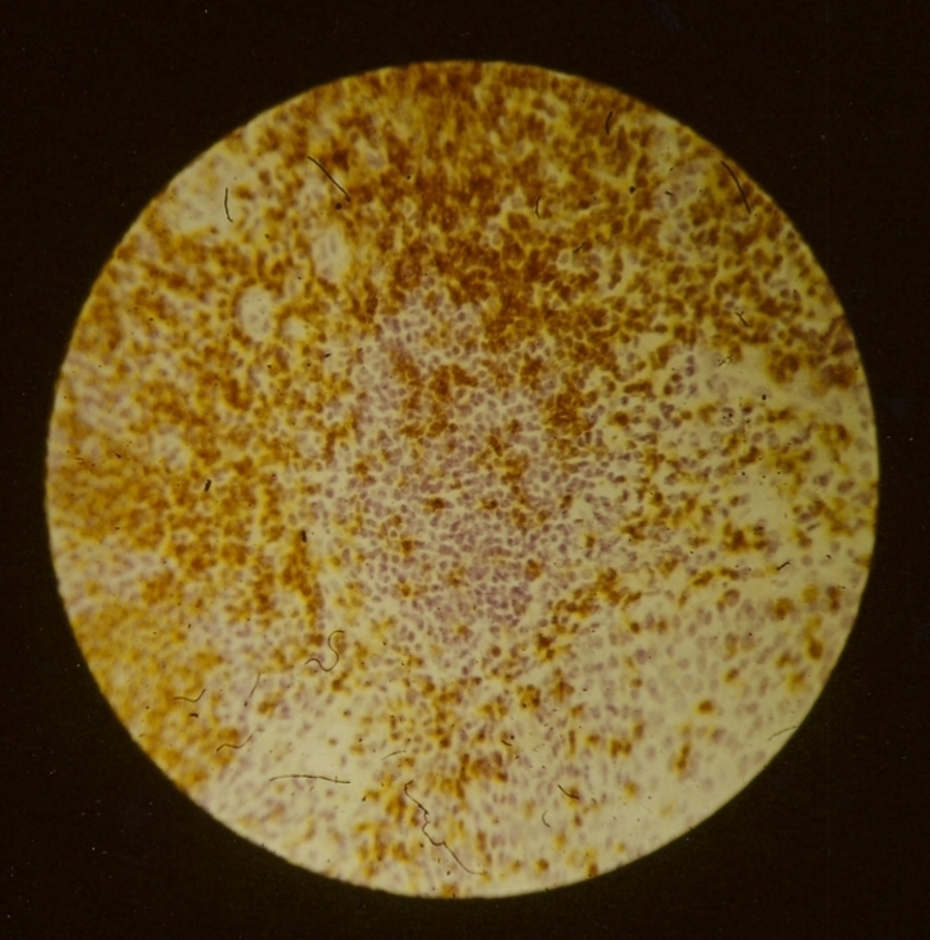 This photograph shows a section of human tonsil seen through an electron microscope. The intense brown staining indicates where Campath-1M is binding T-cells. Such evidence helped confirm the degree to which Campath-1M bound to such cells and thereby met Waldmann's objective in creating the antibody. Credit: Geoff Hale.