In 1983 Sanger turned 65 years old and decided to retire from his scientific work at the Laboratory of Molecular Biology. In part this was dictated by the fact that this was the normal retiring age in Britain. He also felt that his work had come to a climax with his dideoxy sequencing method and that any further work he did would not be as exciting and that as his memory got less 'brisk' he would not be able to make any more important discoveries. Following his retirement, Sanger devoted his time to tending to his garden and enjoyed pottering about on boats and sailing as well as spending time with his grandchildren. This he continued to do until he died at the age of 95 in 2013 (Sanger, 1992; Sanger 2001b).

While Sanger was no longer part of the scientific world, his work has left a long-lasting legacy. His development of the tools and means to read the sequences of proteins and DNA has opened up a whole new world for medical research and treatment. His techniques are fundamental to understanding how an organism lives and functions and to working out the role of proteins in living cells and the disease process. With his techniques it is possible to determine the structure of any protein, analyse its function and map out the complete set of DNA in humans and other organisms. Such information is not only providing crucial insights into the genetic profile of different humans, helping us to understand the differences in disease between people and better tailor their treatment, but also to identify weaknesses in organisms that attack humans, such as bacteria or viruses, so as to design more effective drugs. 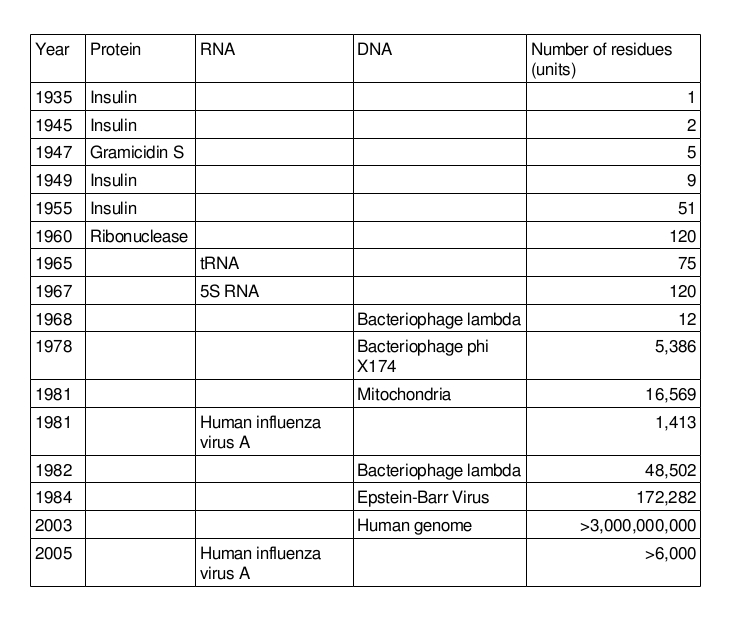 One of the most visible legacies of Sanger's work has been the Human Genome Project (HGP), an international research effort officially launched in 1990 to determine all three billion bases of DNA within the entire human genome and its genes. The first complete sequence of a human genome was achieved in 2003. Since then advances in the technology have significantly accelerated the pace and reduced the price of sequencing. This trend has been further helped by the rise in biostatistics, computing and bioinformatic research, all of which have fuelled an exponential growth in genetic research. Over the past couple of decades more than 1,000 more individual human genomes have been sequenced and more than 1,800 disease genes discovered. A new consortium was set up between the British government and industry in 2013 with the goal of sequencing 100,000 human genomes by 2017. One of drivers behind this initiative was to create a platform for the large-scale application of genomics in routine healthcare (McMullan, 2014; Genomics England, n.d.). 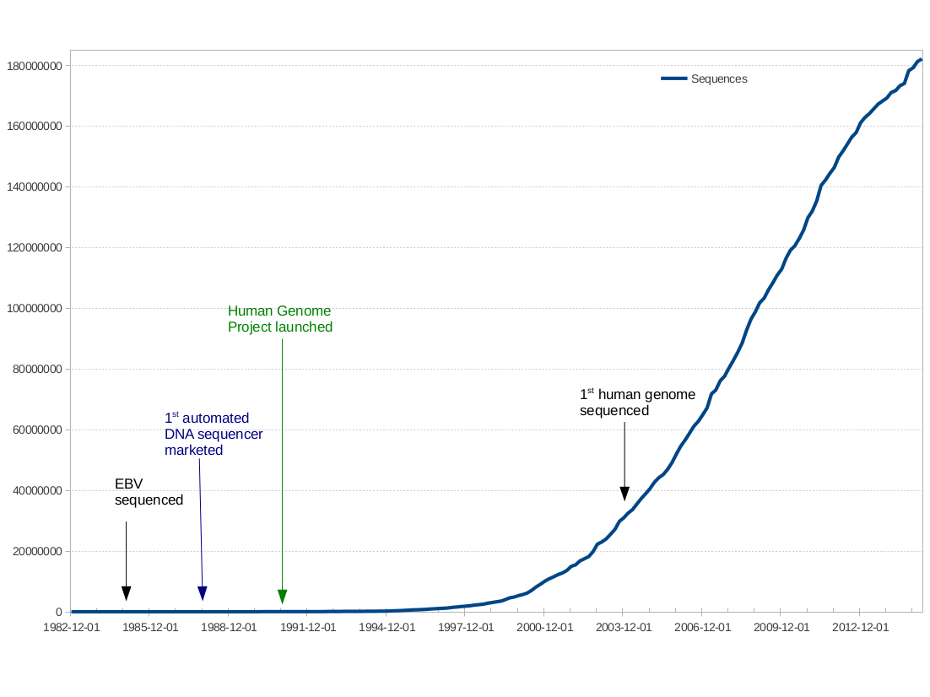 This chart maps the number of whole genome sequences records entered into GenBank, an international database, since 1982. Note the significant rise in the number of sequences after 1997 which was partly spurred on by advances in the sequencing technology generated by the Human Genome Project. Data from GenBank.

Many genetic tests have been devised on the back of the Human Genome Project and have become increasingly common in the clinic. Such tests are performed to determine the genetic cause of a disease and confirm a suspected diagnosis. They are also used to detect where an individual might pass on a genetic mutation to their offspring and to screen embryos, fetuses or newborns for genetic defects. Initially, most of the genetic tests that were developed targeted singe genes associated with rare genetic disorders, such as cystic fibrosis, Fragile X Syndrome and Duchenne Muscular Dystrophy (Genomics England, n.d.; CDCP, n.d.).

In more recent times a growing number of tests have begun to be developed which analyse a number of genes. These are being used, for example, to predict a person's future risk for chronic diseases such as heart disease and cancer, or to work out a patient's risk of a cancer recurrence. Many of these tests are already available through the internet and other commercial outlets. Such tests, however, are still in their infancy and interpreting their results and working out what to do with them remains a major challenge. Moreover, they are not subjected to any regulatory oversight to determine their reliability and accuracy. This has raised major concerns among policy makers and clinicians about their potential to cause undue psychological distress and lead to unwarranted medical intervention with harmful effects. In 2004 the US Centers for Disease Control and Prevention (CDCP) established an evidence-based system to evaluate genetic tests to try and tackle the issue (CDCP, n.d.).

One area where genetic tests have become an increasingly important component in healthcare is in the prediction of a patient's response to therapy. A person's genetic profile can influence their response to medication in a number of ways, including how their body delivers and removes a drug from a targeted site and how well their body's cells will interact with the drug to prompt an effect. Working out the association between genetics and drug response is known as pharmacogenomics. In recent years pharmacogenomics has become an increasingly important component in the drug discovery process to identify a target population most likely to benefit from a drug. Regulatory authorities in both Europe and the US are now increasingly looking to pharmaceutical companies to provide pharmacogenomic data in their submissions for drug approvals and are using such information in the labels inserted into drugs. Pharmacogenomics is also being used in the therapeutic management of patients, helping to work out who is most likely to benefit from a particular drug and determine who is most likely to suffer adverse drug reactions. Many anticoagulants and cancer chemotherapy agents, for example, are now guided by a patient's pharmacogenetic genetic profile to minimise toxic side effects and treatment failures (Tutton, 2014; Ehman, Caneva, Prasad, et al, 2015).

Sanger was enormously proud of his DNA sequencing technique and the revolution it generated. As he stated, 'It is a great source of joy to me that the dideoxy method is still the basic technique used. It was perhaps the climax of my career and makes me feel that all our previous studies on sequences with their successes and failures was not only enjoyable but a worthwhile contribution to the future of medicine' (Sanger, 2001a; Sanger, 2001). Little could he have imagined when he first started sequencing insulin that this would lead to the sequencing of DNA and how much his methods would change the world. In addition to opening up new horizons in medicine, his DNA sequencing technique has had a profound impact on many other areas of life. Not only is it an invaluable tool in forensics, helping to establish the guilt or innocence of a person at the site of a crime, but it is also pivotal to the identification of victims in disaster situations and the paternity of children. Sanger's technique has also provided an important tool for biologists to map out the evolution of different species and is indispensable to those in agriculture seeking to breed animals and plants with greater resistance to disease and better productivity.

McMullan, D (2014) 'What is personalised medicine?' Genome Magazine. Back