Dayhoff is known as the founder of bioinformatics. This she did by pioneering the application of mathematics and computational techniques to the sequencing of proteins and nucleic acids and establishing the first publicly available database for research in the area. 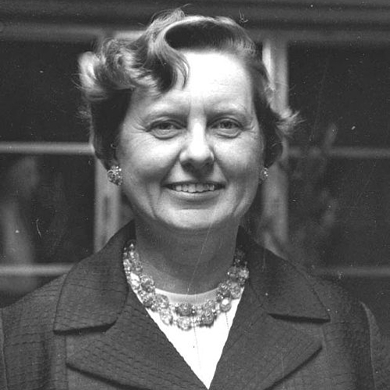 Margaret Oakley Dayhoff was the only child of Kenneth W. Oakley and Ruth P. Clark. Dayhoff's parents moved with her to New York City ten years after she was born in Philadelphia. In 1948 she married Edward S Dayhoff, whom she had met at high school. He had served in the Navy and became a physicist, being known for his pioneering work on the fine structure of the hydrogen atom. The two of them moved to Maryland in 1952 when Edward went to work for the National Bureau of Standards. They had two daughters, Ruth and Judith.

Between 1957 and 1959 Dayhoff was a research fellow at the University of Maryland and worked with Ellis Lippincott on a model of chemical bonding. Following this she became a professor of physiology and physics at Georgetown University Medical Center and in 1960 was appointed associate director to the National Biomedical Research Foundation. Her research interests were the origins of life and the relationship between protein sequences and their role in evolutionary biology. Those she worked with included Ellis Lippincott and Carl Sagon with whom she researched the thermodynamic models of cosmo-chemical systems. From 1961 onwards Dayhoff focused her energies on the creation of tools to aid protein chemists in the determination of amino acid sequences by automatically overlapping the sequences of peptides. One of her innovations was the development of programmable computer methods for use in comparing protein sequences and deriving their evolutionary histories. She also established a computer database for protein sequences, the first of its kind. During her career Dayhoff was a Fellow of the American Association for the Advancement of Science and in 1980 became a councillor for the International Society for the Study of the Origins of Life. She also served on the editorial boards of DNA, Journal of Molecular Evolution and Computers in Biology and Medicine. She was one of the first women to be elected secretary and president of the Biophysical Society.

Dayhoff initiated the first collection of protein sequences. This resulted in her publication of the Atlas of Protein Sequences and Structure. Published in 1965, this book provided a collection of all known protein sequences. The reference book was regularly updated and went through many editions. Today it is considered the founding text for bioinformatics. In 1971 Dayhoff launched the Protein Information Resource, the first on-line database system that could be accessed by telephone line. It was the first sequence database available for interrogation by remote computers. One of her major contributions to the computer programming of protein sequencing was her invention of a single-letter code for amino acids. These had been coded previously with three letters. Dayhoff's new single-letter code greatly reduced the size of the data files needed to describe the sequence of amino acids in a protein. She also devised an amino acid similarity-scoring matrix. This was one of the first tools for database searching, comparing protein sequences and constructing evolutionary trees. Dayhoff died before bioinformatics was recognised as a distinct field, but her methods and tools are vital to the design of many of today's databases and laid the foundation for scientists to research macromolecules and their structure and the setting up of the Human Genome Project. Her development of 'evolutionary trees', based on correlations between proteins and living organisms, also helped establish that certain genes normally found in most body tissue cells are closely related to those found in many cancer cells.