Together with Georges Kohler, Milstein developed the first unlimited supply of monoclonal antibodies, which today underpin many diagnostics and therapeutics. Milstein is the subject of an exclusive exhibition kindly supported by the Medical Research Council. Please go to this page to view the exhibition. 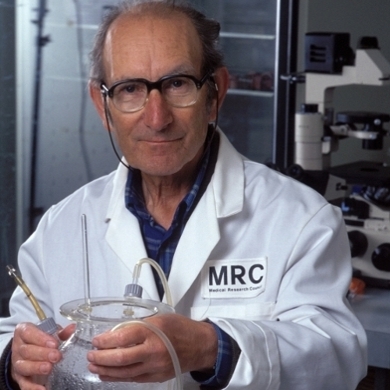 Milstein was the middle son of three boys born to a Jewish immigrant father who came to Argentina from the Ukraine and an Argentinian mother who was the daughter of immigrants from the Ukraine. His father had started life as a farm labourer and then had become a travelling salesman, while his mother had begun her career teaching and rapidly rose to become a headmistress. During his childhood Milstein became fascinated in science when he read of the adventures in The Microbe Hunters by de Kruif and heard stories from his older cousin trying to develop a vaccine for snake venom. In 1953 Milstein married fellow chemistry graduate Celia Prilleltensky.

In his early years Milstein attended schools in his hometown, Bahia Blanca, including Colegio Nacional. His last year of schooling was spent in Buenos Aires to prepare for university. Milstein completed a chemistry degree in 1952 and a biochemistry doctorate in 1958 at the University of Buenos Aires. Funding his studies by working part-time and undertaking research with only the most basic of equipment, Milstein came close to abandoning his doctorate when to his horror on making an enzyme preparation he broke three of the five expensive flasks in his department. He completed this doctorate in 1957. In 1958 Milstein was awarded a British Council fellowship to study at the University of Cambridge, which resulted in a second doctorate in biochemistry.

Milstein was important in advancing the knowledge of antibodies, notably their structure, expression and diversity. In 1984 he was awarded a Nobel Prize for his development, with Georges Kohler, of monoclonal antibodies in 1975. Developed originally as a tool for basic research, monoclonal antibodies opened up new frontiers in diagnostics and therapeutics for over 50 major diseases. Milstein was at the forefront of showing the applications of monoclonal antibodies for automated cell fractionation, studying cell surfaces, tumours, neuropharmacology, typing blood and tissue for blood transfusion and organ transplants, and laying the groundwork for many current blockbuster drugs.

Milstein is the subject of an exclusive exhibition kindly supported by the Medical Research Council. Please go to this page to view the exhibition.

Cesar Milstein takes up a position at the Instituto Malbran, Buenos Aires

Cesar Milstein and Dick Cotton report the successful fusion of two different myeloma cell lines, one from a mouse and the other from a rat

First monoclonal antibodies generated for use in radioimmunoassays

Monoclonal antibodies generated for routine use in ABO blood typing