The first to determine the amino acid sequence of insulin, Sanger proved proteins have a defined chemical composition. He was also pivotal to the development of the dideoxy chain-termination method for sequencing DNA molecules, known as the Sanger method. This provided a breakthrough in the sequencing of long stretches of DNA in terms of speed and accuracy and laid the foundation for the Human Genome Project. 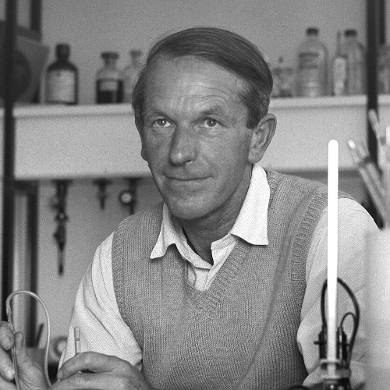 Fred Sanger was the middle son of three children. His father, Frederick, started his work life as an Anglican medical missionary in China, but poor health forced him back to England where he took up a position as a general medical practitioner. Sanger's father converted to Quakerism soon after Fred's birth and raised the children as Quakers. Although Sanger's mother, Cicely (neé Crewdson), was the daughter of a wealthy Quaker cotton manufacturer she did not follow Quakerism. Sanger grew up in Rencomb, Gloucestershire, until he was fives years old, and thereafter lived with his family to Tanworth-in-Arden, a small village in Warwickshire. Both of Sanger parents died from cancer when he was in his second year at university. In December 1940, Sanger married Margaret Joan Howe, an economics student who was based at Newnham College, Cambridge. The two of them met through the Cambridge Scientists' Anti-War Group. Fred and Margaret had two sons and one daughter. Sanger highly valued Margaret claiming that she had aided his scientific work more than anyone else. Her contribution, he argued, was maintaining a peaceful and happy home.

Sanger was initially taught by a governess and then from the age of nine boarded at Downs School, a residential Quaker preparatory school near Malvern, Worcestershire. In 1932, when he was 14, Sanger was sent to Bryanston School, Dorset, which tailored its education in line with the Dalton Plan. The Plan encouraged students to be schooled according to their needs and to foster in them a sense of independence and responsibility for others. Sanger enjoyed Bryanston's liberal ethos and particularly liked studying science while there. After receiving good results in his School Certificate examinations, in 1936, Sanger went to St John's College, Cambridge, to study the natural sciences and took biochemistry in the final part of the course. In October 1940 Sanger began a doctorate investigating whether an edible protein could be obtained from grass under N.W. 'Bill' Pirie. When Pirie left Cambridge, a month later, Sanger switched to the supervision of Albert Neuberger, under whom he studied the metabolism of lysine, an essential amino acid for humans, and worked for a government sponsored research project examining the nitrogen content of potatoes. Sanger completed his doctorate in 1943.

Sanger originally wanted to pursue a career in medicine like his father, but soon realised he was better suited to science. During the Second World War Sanger registered as a conscientious objector and did some training in social relief work before briefly serving as a hospital orderly. After completing his doctorate, Sanger became a post-doctoral researcher in the Biochemistry Department, Cambridge University, working with the protein chemist Charles Chibnall and his team on the chemical structure of proteins. This was done using chromatography, a newly developed technique. Sanger's first project involved investigating the amino acid composition of insulin. One of the advantages of studying insulin was the fact that its chemical structure was small. It also could provide some understanding for diseases such as diabetes. Sanger's work was aided by the fact that insulin was one of the few pure proteins then available in large quantities, being collected from cattle. The objective of the research was to determine the exact chemical structure of insulin. Sanger initially struggled to get funding for his project because most scientists believed amino acids in proteins were randomly arranged and their pattern could not be determined. In 1944, however, he was awarded a Beit Memorial Fellowship for Medical Research. Six years later he was appointed a member of the external staff of the Medical Research Council (MRC) in recognition of the importance of his work. Sanger moved his laboratory from the Biochemistry Department to the MRC's newly opened Laboratory of Molecular Biology in 1962 where he was to head up the Laboratory's Protein Chemistry division until 1983 when he retired.

Sanger was one of the few scientists to have been twice awarded a Nobel prize for Chemistry. He won the prize the first time in 1958 for developing methods for sequencing amino acids. This he developed in his quest to understand the structure of insulin. His method involved marking the terminal amino acid and then splitting it away from the insulin protein for identification. After 8 years of repeating this painstaking process, Sanger eventually determined insulin was made up of 51 amino acids. His research, published in 1955, provided the first conclusive evidence that proteins have a defined sequence. Following his work on insulin, Sanger turned his attention to sequencing the building blocks in DNA, called bases. By this time it was known that DNA had a linear code, but no methods existed for reading it. Sanger saw the challenge as a natural extension of his protein sequencing work. Helped by Bart Barrell, Alan Coulson and George Brownlee, Sanger explored a number of methods over 15 years. In 1975 he and his team published a paper outlining what they called the 'Plus and Minus' technique. This enabled the sequencing of 80 nucleotides in one go. Sanger and his team used it to sequence the genome of the virus phi X 174, the first DNA-based genome ever sequenced. The work showed for the first time that some genes overlapped with the other. Following this, in 1977, Sanger and his colleagues announced another method, known as the 'dideoxy' chain-termination technique or the 'Sanger method'. This allowed for the rapid and accurate sequencing of long stretches of DNA. As many as 3,000,000,000 base-pairs, 500 bases, could be read at one time. The technique earned Sanger his second Nobel prize, in 1980, which he shared with Walter Gilbert and Paul Berg and provided the blueprint for sequencing the whole human genome. In 1981 Sanger was awarded a knighthood, but he turned it down because he did not want to be called 'Sir'. Five years later he was awarded the Order of Merit which he accepted.

Sanger studies for a doctorate at Cambridge University

Sanger completes the full sequence of amino acids in insulin

Sanger and Coulson publish their plus minus method for DNA sequencing

Fred Sanger, the inventor of DNA sequencing, died at the age of 95