Together with Stanley Cohen, Boyer demonstrated the possibility of producing recombinant DNA in bacteria in 1973. This they did by combining a gene for frog ribosomal RNA with a bacterial plasmid which was then put into a strain of E-coli for expression. Based on this technique Boyer helped found Genentech, the first biotechnology company dedicated to commercialising recombinant DNA. This he did in 1976 in collaboration with Robert Swanson. 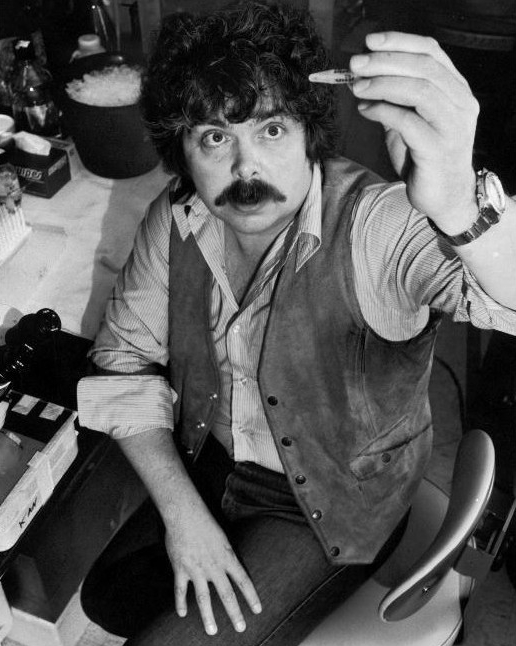 Herbert W Boyer grew up in Derry, a small town in Pennsylvania. Both his father and grandfathers worked for the Pennsylvania Railroad. While Boyer's mother graduated from high school, his father had been forced to leave school and start work at the age of 13 to support his family after the death of his father. For much his youth Boyer had little interest in academic studies, preferring instead to play football, basketball and baseball. His fascination for science was awakened by his football and baseball coach who taught also him science and mathematics at school. In 1959, at the end of his first year in graduate school, Boyer married Marigrace Hensler. They had met while in high school. Marigrace was a biology graduate and at the time of their wedding was working for Mellon Research Laboratories, a company that tested chemicals for companies. The salary she earned helped support them while Boyer completed graduate school.

Boyer attended public schools and in 1954 went to St Vincent College, the first Benedictine College in the United States. This he did while living at home. In 1958 he graduated with an AB degree in Biology and Chemistry. After failing to win a place in medical school, Boyer opted to study at the University of Pittsburgh, where, inspired by Watson and Crick's unravelling of the helix structure of DNA in 1953, he began a doctorate investigating the fine structure of the genetic code. He completed his PhD in 1963.

During the course of his doctorate Boyer began to develop a fascination with the way that chromosomal DNA can be transferred from one strain to another. Wanting to pursue this topic further at post-graduate level, between 1963 and 1966, Boyer decided to move to the department of microbiology at Yale University where he became a research fellow in the laboratory of Edward Adelberg. Much of his work during this time focused on bacterial plasmids and learning the skills to purify and characterise restriction and modification enzymes. He soon realised such enzymes could be a useful tool for both cutting and recombining DNA and for its characterisation. In 1966 Boyer was appointed assistant professor in microbiology at the University of California San Francisco (UCSF) where he launched a project to understand how proteins recognise unique sequences of DNA. This he did using restriction enzymes and modification methylases as model systems. In early 1972 Boyer and his graduate student, Bob Helling, discovered a restriction enzyme (later called EcoRI) produced by Escherichia coli. The advantage of the enzyme was that it cut DNA into pieces with overlapping, single-stranded ends. This opened up a means to rejoin DNA fragments in a similar way to a lap-joint in wood joinery. Soon after this Boyer launched a collaborative experiment with Stanley N Cohen, who was based at Stanford University, to construct and clone recombinant DNA. By 1973 they had succeeded in this endeavour using both Boyer's enzyme and a bacterial plasmid, pSC101, isolated by Cohen. Their breakthrough paved the way to the widespread adoption of genetic engineering in both academic and industrial settings. In subsequent years Boyer continued to make improvements to recombinant DNA technology and was involved in its first commercialisation. This he did alongside continuing to be a professor at the UCSF and an investigator for the Howard Hughes Medical Institute.

Boyer is not only associated with the development of the first method for cloning DNA, but also with the founding of Genentech, the first dedicated biotechnology company. This he did with the venture capitalist Robert Swanson in 1976. Serving as Genentech's vice president between 1976 and 1991, Boyer led the company's efforts in demonstrating how bacteria could be genetically modified for the mass production of human proteins, such as insulin and growth hormones, for therapy. Such work helped fuel the birth of the modern biotechnology industry. Boyer has received numerous awards for his achievements. These include the Albert Lasker Award for Medical Research (1980), Industrial Research Institute Achievement Award (1982), the National Medal of Technology (1989), National Medal of Science (1980), Helmut Horten Research Award (2000), Biotechnology Heritage Award with Robert A. Swanson (2004) Albany Medical Center Prize with Stanley N. Cohen (2004), Shaw Prize in Life Science and Medicine (2005), Winthrop-Sears Medal (2007) Perkin Medal (2009) CSHL Double Helix Medal (2000).

Together with Stanley Cohen, Boyer demonstrated the possibility of producing recombinant DNA in bacteria in 1973. This they did by combining a gene for frog ribosomal RNA with a bacterial plasmid which was then put into a strain of E-coli for expression. Based on this technique Boyer helped found Genentech, the first biotechnology company dedicated to commercialising recombinant DNA. This he did in 1976 in collaboration with Robert Swanson. 1936-07-10T00:00:00+0000Herbert Boyer was born in Derry, Pennsylvania, USAThe work was carried out by Stanley Cohen and Annie Chang at Stanford University in collaboration with Herbert Boyer and Robert Helling at the University of California San Francisco. They managed to splice sections of viral DNA and bacterial DNA with the same restriction enzyme to create a plasmid with dual antibiotic resistance. They then managed to insert this recombinant DNA molecule into the DNA of bacteria to express the new recombinant DNA. The technique showed it was possible to reproduce recombinant DNA in bacteria. It was published in SN Cohen, ACY Chang, HW Boyer, RB Belling, 'Construction of Biologically Functional Bacterial Plasmids In Vitro', PNAS USA, 10/11 (1973), 3240-3244. 1973-11-01T00:00:00+0000First time DNA was successfully transferred from one life form to anotherJF Morrow, SN Cohen, ACY Chang, HW Boyer, HM Goodman, RB Helling, 'Replication and Transcription of Eukaryotic DNA in Esherichia coli', PNAS USA, 171/5 (1974), 1743-47.1974-05-01T00:00:00+0000Recombinant DNA successfuly reproduced in Escherichia coliThe call was published by P Berg et al 'Biohazards of Recombinant DNA,' Science, 185 (1974), 3034. It argued for the establishment of an advisory committee to oversee experimental procedures to evaluate the potential biological hazards of recombinant DNA molecules and develop procedures to minimise the spread of such molecules within human and other populations. 1974-07-05T00:00:00+0000Temporary moratorium called for on genetic engineering until measures taken to deal with potential biohazardsRobert Swanson, venture capitalist and Herbert Boyer, American biochemist, established Genentech in San Francisco. It was the first biotechnology company established specifically dedicated to commercialising recombinant DNA. Its founding marked the start of what was to become a burgeoning biotechnology industry. 1976-04-01T00:00:00+0000Genentech foundedThe American scientists Stanley Cohen and Herbert Boyer are awarded the first US patent for gene cloning.1980-01-01T00:00:00+0000First patent awarded for gene cloning