Sinkovics was one of the first scientists to recognise the possibility of immortalising a specific antibody-producing cell by fusion with a lymphoma cell, the principle that underlines the generation of monoclonal antibodies today. He has also been a major pioneer in cancer research, being one of the first to discover large granular lymphocytes could kill cancer cells without pre-immunisation of the host and that attenuated (weakened) viruses could destroy tumour cells in vitro which led to his development of some of the first viral therapies against cancer. 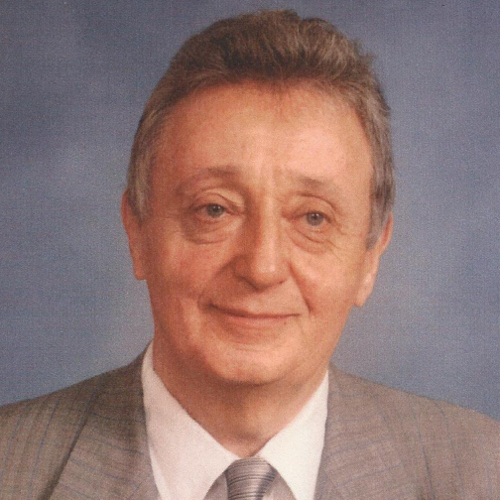 One of Sinkovics' earliest memories was as a nine year old boy standing at the hospital bedside of his father for three days and nights as he lay dying in agony from peritonitis resulting from a perforated appendix which caused septic shock. As he recalled 'it was a horrible death'. His abiding image is that of the priests murmuring their prayers as the medical staff tried in vain to save his father. Sinkovics' father was Chef Supreme at a world famous restaurant called Gundel based in Hotel Gellert on the river Danube in Budapest.

The trauma of watching his father die made Sinkovics determined to become a doctor so he could cure the disease that had killed him. His mother was to be driving force in this ambition. Right from the moment she became a widow she began looking for a means to earn enough money to pay for Sinkovics to train as a doctor. By 1942 she had saved up sufficient funds cover the cost of Sinkovics' full university tuition for one year.

Sinkovics completed his medical training in six years and then married Erzebet Monar, a virologist at the State Institute of Hygiene (Public Health). The couple had twin children, Geza (a Holywood trained cameraman) and Eszter (a Hungarian high school teacher).

In 1942 Sinkovics matriculated from Zrinyi Miklos Gymnasium in Budapest. Following this he enrolled at Peter Pazmany University in Budapest. Like the rest of the population in Hungary Sinkovics was soon caught up in the events of the Second World War. In September 1944 the Soviet Army marched into Hungary, and between December 1944 and February 1945 lay siege to Budapest, the longest siege endured by any city during the war.

By February 1946 the Soviet Union had installed a Communist regime in Hungary. That year Sinkovics, like all university students, had to endure a committee investigation into whether he had collaborated with German occupational forces and their extreme right-wing Hungarian puppets. Found to have extended help to those whose lives were threatened, he was eventually given the stamp 'Igazolt' ('investigated and found clean') so was able to resume his studies. Life on the university campus, however, continued to be tense. In 1947, Sinkovics remembered the applause given to Imre Haynal, one of his professors of internal medicine, when he bravely replaced some Party posters provocatively put up in his classroom by some communist medical students.

During his studies, Sinkovics was also taught by Tivadar Huzella, a professor of histology and ontology (embryology) who was a master of tissue culture and an expert on the nature of the formation of fine fibres known as fibril and of extracellular matrix biology. Shortly after teaching Sinkovics, Huzella was dismissed from the university for refusing to withdraw his critical statements about Stalin.

In the last few years of his medical degree Sinkovics worked without a salary for Laszlo Berta at the Institute of Microbiology and Pathophysiology. The project concerned antiviral immunity. Sinkovics' time with Berta proved particularly important for learning some basic virologic techniques, including how to autopsy inoculated mice, prepare tissue extracts and titrations. These would later prove useful for his future research.

After his graduation, Ferenc Farago, chair of the Medical Microbiology Department invited Sinkovics to join the Institute of Microbiology as an assistant professor to develop a section on virology. A former Rockefeller Fellow, Farago remained strongly pro-western during the communist take-over of Hungary and retained strong ties with English and American academics. Ever watchful of being reported to the state's secret police, Sinkovics and his colleagues sought refuge from the political turmoil around them by directing their attention to understanding the relationship between viruses and cancer. Encouraged by Farago, Sinkovics devoted his energies to studying lymphocytes, a type of white blood cell crucial to the immune system. At the time lymphocyte function was still uncharted territory.

Prior to joining the Institute, Sinkovics secured a brief visit to Bratislavia to work with Dionyz Blaskovics who had studied at the University of Philadelphia with Gertrude and Werner Henle, a husband and wife team famous for their work on flu vaccines and developing a diagnostic test for mumps. Sinkovic quickly realised from this trip that he would greatly benefit from an American fellowship in virology, immunology and infectious diseases. His dream, however, was crushed by the increasing grip of the iron curtain and difficulties non-communists had securing passports to get out of the country.

Once back in Budapest, Sinkovics successfully managed to isolate a number of viruses from patients, including Newcastle disease, influenza, mumps and lymphocytic choriomeningitis. This he did using techniques he had picked up from textbooks.

In the summer of 1950 Sinkovics' life and work was suddenly interrupted as a result of the arrest of Farago. Aged only 40, Farago died in prison only a few weeks later having been beaten and tortured. Soon after this Sinkovics was also arrested and taken to prison where he was placed in solitary confinement and then transferred to the worst political prison in Hungary to be become its prison doctor. Over the next three years he was repeatedly exposed to cough and blood droplets from his fellow prisoners dying from tuberculosis.

A number of things helped Sinkovics survive his ordeal. Firstly, as a prison doctor he was entitled to extra food and showers. Secondly, the chief prison physician who was a major of the secret police, declared Sinkovics not guilty of a crime and helped him set up a virus laboratory within the prison at the same time as lending him articles written in English, French and German borrowed from the Medical School library. Based on this Sinkovics managed to continue doing some research. During this time he managed to achieve the photodynamic inactivation of influenza viruses and explore their immunogenic potency as vaccines as well as write a textbook on virology.

Sinkovics was finally released from prison in December 1953. Within a few months all charges against him had been dropped and he was appointed virologist to the State Institute of Public Health. In 1954 his virology textbook was published in Hungarian and two years later in German. Two years later, in November 1956 Sinkovics escaped to Vienna to avoid imprisonment in the wake of the crushing of the Hungarian uprising. Once in Vienna he managed to secure a Rockefeller Foundation Fellowship to the United States on the back of a telegram he sent to Albert Sabin who had written him a letter to compliment him on his virology textbook.

Once in America, Sinkovics spent a year in the laboratory of Vincent Groupe at Rutgers' Waksman Institute and then in 1957 moved to work as an intern and resident at Cook County Hospital, Chicago, to secure his American licence for clinical medicine. This he completed in December 1961. He had interrupted his training at the hospital for a year in 1959 to take up a research fellowship at the University of Texas M.D. Anderson Hospital in Houston, Texas, where he secured a position after completing his residency. Sinkovics remained at M.D. Anderson Hospital until 1979. Following this he was attached to Baylor College of Medicine (1979-89), and the University of South Florida College of Medicine, Tampa. From 1983 to when he retired Sinkovics was a medical director at the Cancer Institute St. Joseph's Hospital in Tampa.

Working quietly behind the scenes Sinkovics, made a number of key discoveries which received relatively little public fanfare or recognition. In 1958 he published an article in Nature showing that bacterial protoplasts (bacteria that have no cell walls) are so small and flexible they can pass through a filter and then fuse with each other to regenerate the bacteria. Soon after this, in 1963, he demonstrated that the mouse leukaemia virus struggles to replicate in mice and that graft-versus-host disease can prevent leukaemia in mice with chronic runt disease. Five years later he discovered that cancer cells could be killed by large granular lymphocytes without first immunising the host organism. This phenomenon he first observed in his own blood. Initially the NCI could not see the significance of what he had found so denied him funding to pursue the project further. This decision was later reversed in the early 1970s following the discovery 'natural killer cells' by other NCI scientists.

Sinkovics similarly struggled to gain recognition for another one of his discoveries. In 1968 he developed a tissue culture technique for generating antibodies to a specific target. This was something that other scientists had found difficult to achieve. Sinkovics' method took advantage of a particular mouse lymphoma cell he and his team had found which naturally fused with a splenic plasma cell that produced antibodies. By 1970 Sinkovics and his colleagues had shown these fused cells could be grown in suspension culture for many years and continued to produce specific mouse leukaemia virus-neutralising antibodies. They subsequently abandoned the project because they could not envisage the antibodies having any therapeutic applications and lacked funds to pursue the project any further.

Sinkovics was also an early pioneer of the development of viral therapy for cancer. This he began while still in Hungary. By 1967 he had started testing the use of viral therapy at the M.D. Anderson Hospital to treat patients with melanoma and sarcoma. This he did on the back of his discovery that attenuated viruses could destroy tumour cells in test tubes. He and his colleagues subsequently found that immune lymphocytes grown in culture could be re-infused into patients to destroy cancer cells.

This piece was written by Lara Marks, October 2016.