Phage display is a laboratory platform that allows scientists to study protein interactions on a large-scale and select proteins with the highest affinity for specific targets.

The photograph shows a phage as seen under a microscope. Credit: Ian Hands-Portman. 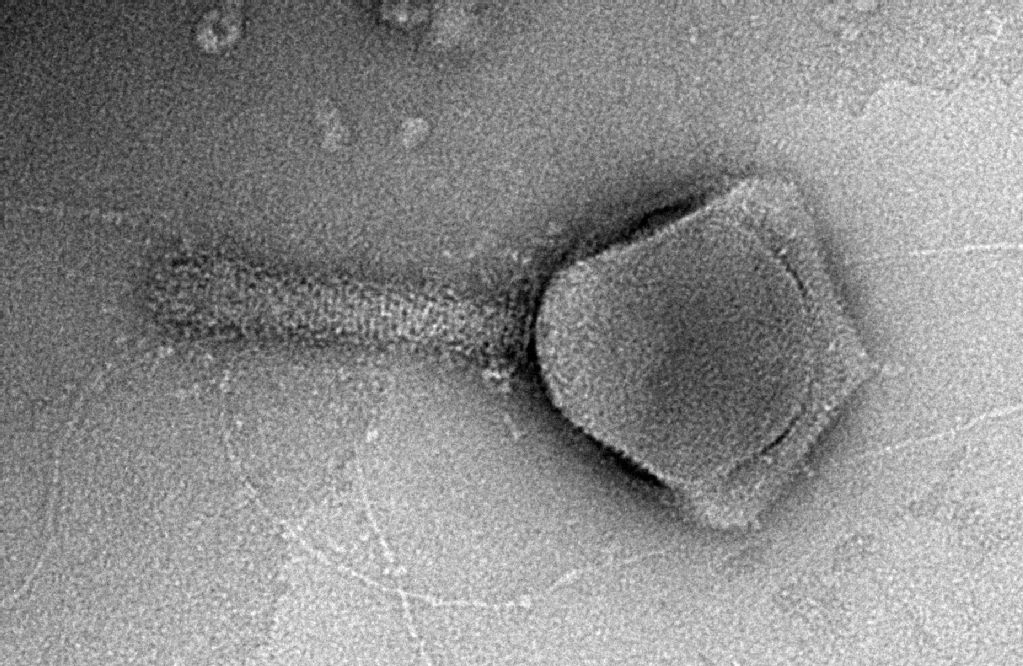 The key advantage of phage display is that it provides a means to identify target-binding proteins from a library of millions of different proteins without the need to screen each molecule individually. This makes it possible to screen billions of proteins each week. By linking a selected protein with its encoding gene, phage display also provides a means to easily identify coding sequences of binding proteins. These can be stored, amplified or processed in other ways. Phage display is a pivotal tool for early basic scientific research and for the development of new drugs and vaccines. The technology has proved particularly important to the production of safer and more effective monoclonal antibody drugs. Phage display libraries consisting entirely of human antibody sequences, for example, have made it possible to produce fully human antibodies. The first fully human therapeutic antibody (adalimumab), a blockbuster drug, generated US$9.3 billion in annual sales in 2012. Four fully human therapeutic antibodies currently approved as treatments in the US and the UK were developed using phage display and many more are in the pipeline. Phage display is also used to develop vaccines for conditions such as prostate cancer and HIV. It is also an important tool for the generation of diagnostic tests for monitoring disease progression and evaluating treatment efficacy.

Phage display was first described by George P Smith in 1985, who deployed it as a method to identify a gene against which he had raised antibodies. The technique was taken further by Greg Winter and John McCafferty at the Laboratory of Molecular Biology in Cambridge, UK, and Richard Lerner and Carlos F. Barbas at The Scripps Research institute, US, who independently used phage display to build large libraries of fully human antibody sequences. This work laid the foundation for the development of human antibody based drugs. Today there are several types of phage display libraries, including peptide libraries, protein libraries and antibody libraries.

The phage display technique relies on the generation of a library of millions of bacteriophages that have been genetically engineered to display different peptides or proteins on their surface. This is achieved by inserting a gene encoding a protein of interest into the phage's protein shell, which sets up a direct physical link between DNA sequences and their encoding proteins. The aim of the modification is to generate a molecule that can mimic a natural modulator within the cellular process. Several types of phages are used for the purpose of phage display. Filamentous bacteriophages are the most popular.

The genetically modified phages are assembled into a library for use as a platform to screen proteins, peptides and DNA sequences. Screening is performed by the addition of the phage-display library to the wells of a microtiter plate that contains immobilised target proteins or DNA sequences. The plate is then incubated for some time to allow the phages to bind with the target of interest and then washed so as to flush away any non-binding phages. Any phages that remain attached to the wells are then removed and inserted into other bacteria for replication. The cycle is repeated until only phage-displaying proteins highly specific for the target remain. Once the whole process is completed, the gene coding for the specific protein is isolated and purified from the phage so that it can be used for different applications.

Any laboratory that is well versed in basic microbiology can easily make a phage display library with minimum expense. This has allowed phages to become an invaluable tool for basic immunological and cellular biological research as well as for the development of new drugs and vaccines. Prior to the development of phage display, drug development depended on the time-consuming and expensive process of combing through hundreds of thousands of components using tests conducted in test tubes or laboratory dishes.

This section was put together by Lara Marks with Gavin Hubbard.

Jules Bordet, unable to replicate d'Herelle's results with phage therapy, challenged d'Herelle's conception of a phage as a virus

Establishment of Eliava Institute of Bacteriophages, Microbiology and Virology in Tbilisi, Georgia

Modification of methods to grow phages for therapy

Bacteriophage Inquiry launched to study the effectiveness of phage therapy

Theory put forward about the contagious and hereditary nature of bacteriophages

d’Herelle issued a public challenge to Bordet's theory about bacteriophages

Germans invaded Russia, not only to capture the oil wells but also to obtain the phages preparations at the Tbilisi Institute in Georgia

Electron microscope used to identigy and characterise a bacteriophage

Phage display method is developed for selecting peptides, proteins or antibodies from a wide number of variants.

Phage therapy shown to be effective in animals to control A. baumannii, P. aeruginosa, and S. aureus infections and to prevent destruction of skin grafts by P. aeruginosa

Publication of a review on the different life cycles of bacteriophages

First phase I clinical trial with phage therapy in US